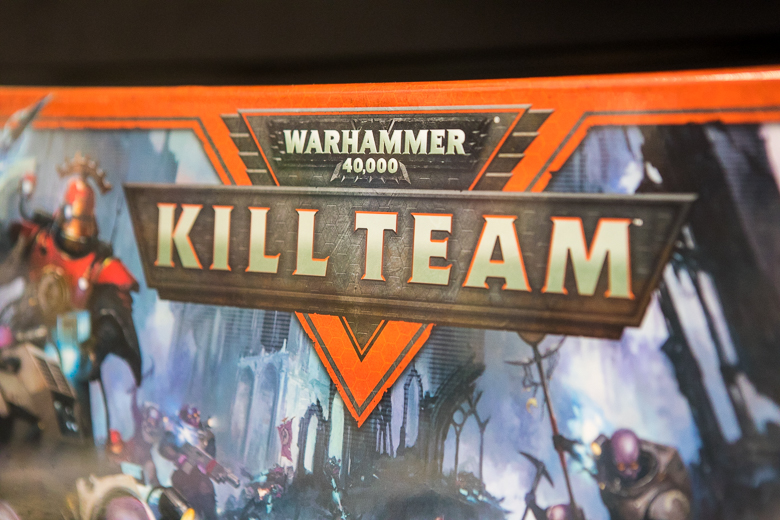 Once more unto the warp: succumbing to the temptation of Games Workshop’s Kill Team

Ahhh, Kill Team. Just a week ago, you were barely a glint in my eye – and now, you’re all I can think about. What in the Eye of Terror is happening?!

Trust me, I’m as surprised as the next person to be this excited about a new Games Workshop (GW) product.

One minute, I’m blithely unaware of the forces gathering in GW’s latest boxed incursion into the world of tabletop warfare. The next thing I know it’s sitting on my chest in the middle of the night like a Callidus assassin.

This morning, I swear one of the other dads on the nursery drop-off met my eyes and silently mouthed ‘Kill Team’ at me before driving off.

Look, I understand why I’m obsessed with it, but that doesn’t mean I have to be happy about it.

I wasn’t looking for more rabbit holes to fall down. I have a Gloomhaven campaign that’s going very nicely, thank you. There is a stack of excellent-looking RPGs just crying out for campaigns just next to my bed. Let’s not even talk about the poor settlement of Edmond’s Field and their crying need for more monster resources.

So why is that, that when I finally thought I was out, they pulled me back in?

Kill Team is like bumping into an ex after years and years, and they’re looking good. It promises everything you love about the idea of 40K, with a much lower barrier to entry. It’s basically a gateway drug.

It’s a smaller scale (for 40K) skirmish game, fought between squads of (usually) about five to ten models and playing in around an hour.

For a recovering GW groupie, that’s an enticing concept, to say the least.

No longer do you need to invest infeasible amounts of time and money to experience the endless war of the 41st millenium. You can pick up a few models, the rulebook, and some (essential) terrain for a reasonably modest investment of £80 (about $130). In theory, at least.

Look, the Boards and Booze team have a long, chequered history with 40k. We love the hobby side of it. The lore is practically part of our childhood, and now we understand satire better it’s become as hilarious as it is evocative over the years. Actually playing the game has almost become an afterthought.

I’ve personally therefore been able to ignore 40k for years. It’s a) too complex for my ageing brain, b) takes too long to play, and c) costs too much to play properly. (Don’t forget that playing without the stunning scenery found in every Games Workshop store inevitably dampens the experience.)

Kill Team’s features list looks like it tackles every single one of those objections. It’s been engineered to target the part of our brains that will forever be 13 years old with ruthless, laser precision.

And so help me god, I want it.

Mentally, I’m a child in a sweet shop, running to each new army and turning it over before my attention is caught by another shiny display and I dash across to rinse and repeat.

Finally, I can put together the Chaos Space Marine squad I’ve been imagining since I first discovered they were a thing in Space Crusade. See also the Genestealers I could send hurtling at my puny, non-chitinous opponents.

I remember when Tyranids were the new thing, so what’s a Necron? And a Tau? I want them too, of course.

And look – a troupe of Eldar Harlequins coming over the hill of my imagination! Yes please, I’ll take ten. I suppose while I’m at it, I could always embrace the craziness of a Ork force too…

The mental litany is endless. It’s exhausting, as it is exciting. Because it seems easy, my cup runneth over with enthusiasm.

But am I just fooling myself? I dig deeper, looking at forums and builds. I know that some of the complexity is just because I don’t know the terminology, but still.

Just how simple are the rules, exactly?

Kill Team and the search for accessible violence

I’ve been chasing the ideal two-player war game for my tastes for years, and that’s partially because I know my limits. I’m not a natural wargamer: I need simplicity. Accessibility.

I have so much love for Fantasy Flight’s Star Wars games, Armada and X-Wing. But Armada in particular takes just so long, and its complexity is just nudging the limit of my ability to cope with. I’ve peered over the wall of games like Infinity and Malifaux and never quite pulled the trigger on those either.

That search probably stems from Warhammer all those years ago. It would certainly explain why I’m so desperate to investigate Kill Team.

My big issue is that the rulebook isn’t readily available. WIthout that, it’s impossible for me to gauge whether I’m safe to jump in or whether I’ll be way out of my depth. In some senses I don’t mind that. (This is also an excuse to buy some figures and paint them, let’s not pretend otherwise).

But I don’t need to spend money on a rule book I’ll never use if that’s all I’m going to do.

And yet how many times have I revisited the GW website? I keep coming back, I keep reading the fluff, and I keep imagining the glory of battle. With every visit, my resolve weakens.

I know precisely where the local Games Workshop is, too. Maybe I just need to stop by and see for myself what all the fuss is about. It couldn’t be that slippery a slope… could it?