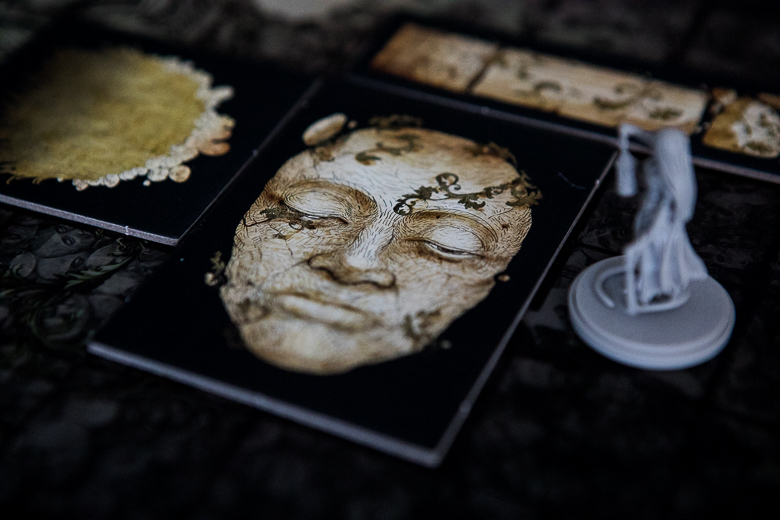 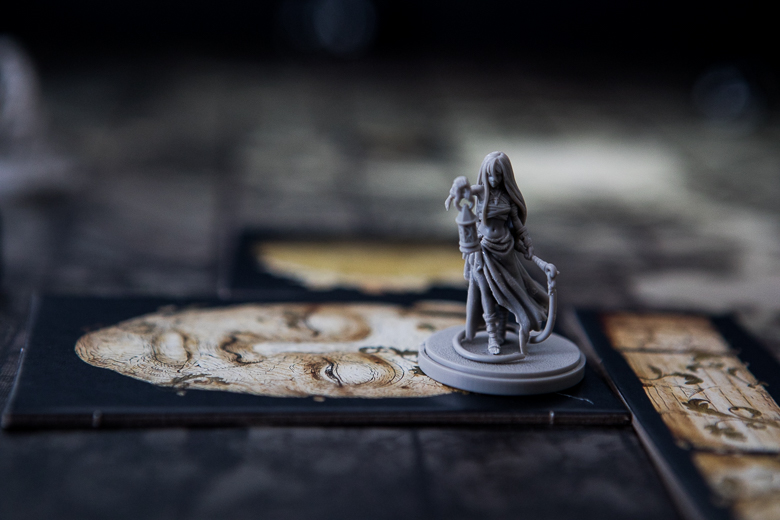 Last time in our Kingdom Death: Monster campaign playthrough, our plucky survivors faced off against a Screaming Antelope. This time it’s the turn of a White Lion, at least once the good people of Edmond’s Field finish dismembering and seducing one another (pretty much in that order).

Who will emerge victorious? Read on to find out!

Our brave survivors cruise back into town, much to everyone’s delight. Festooned in Screaming Antelope entrails, they no doubt delight the local children by throwing them a few loops of intestine to play with.

Because Statue suffers from the hoarder disorder, one of these organ resources is immediately archived on his return. He grows in courage as a result though, triggering his ‘bold’ event and becoming a ‘matchmaker’: as a returning survivor, he may spend one endeavour to trigger intimacy. Essentially, Statue is now that friend of yours who tries to pair everyone off with each other.

The cheerily-named story event ‘Triathlon of Death’ then gets underway. Four of our survivors will compete to see who comes out on top. No way this is going to end badly.

The race pans out as follows:

The results of the debate are:

Last but not least is the fighting contest:

An outpouring of creative energy gives rise to the innovation ‘paint’. Hoorah. Both Tony Hart and Bob Ross are now playable characters. Oh, and also, survivors may now spend one survival point to dash during a showdown, and move up to their full movement.

While this is going on, Statue gets to work spinning the winning line ‘my mate fancies you’ up and down the settlement. Astonishingly, this works, and previously unnamed survivors Moraine Damodred and Richie Rich make eyes at one another, and get it on. Baby time!

While the sweet sweet loving happens, the other good people of Edmond’s Field build a Skull Helm, a Whisker Harp, and two more rawhide vests.

Things seem to be going well, so Statue, Egwene and Elayne splash out on augury at the settlement’s organ grinder. This leads to (amongst other things like understanding and survival) more intimacy! Quickly, someone innovate the wah-wah pedal and revolving beds.

The last Bottom/Wheel of Time mash-up was so successful that this time Spudgun and Lanfear are the two consenting adults. The community’s guiding principle of protecting the young comes in handy here (re-rolling the initial result of a 2), leading to twins being born.

There are now so many people in the settlement that everyone decides it’s about time to decide on how their society is going to look, opting for ‘Collective Toil’, which sounds suspiciously close to communism for this author.

Before you know it, another Lantern Year has rolled around and it’s time to venture out into the darkness again…

The survivors decide their quarry will be the White Lion. The reason for this is twofold. For one, they still haven’t managed to get a Cat’s Eye resource with which to craft a Cat Eye Circlet yet. Also, the Gorm expansion hasn’t turned up yet.

Unfortunately, Statue’s gammy Achilles tendon means he can’t leave on a hunt. Perrin can’t go either on account of his binge eating disorder – he has nothing to eat so stays at home and sulks.

Lanfear, after giving birth to twins, steps up big time and joins the hunting party. Now that’s a team player.

If further proof were needed of what a dark place the world of KDM is, there is no parental leave available for anyone. And don’t even talk to me about pensions.

The party almost immediately find evidence of the lion’s passing. Claw marks scar the ground all around them but Egwene makes a mockery of her self-professed investigation skills by turning up nothing further.

They carry on but it becomes apparent the prowling lion is busy looking for something else (moving away from them on the hunt tracker, and gaining ‘Ground Fighting’ to start the showdown with).

A blast of chill air stops the hunters in their tracks, as they come upon a perfectly preserved corpse in the middle of a sudden frost. What they lose in survival (one each!) because of this, Elayne gains in courage and understanding.

But not quite enough understanding to foresee what happens next. The ground opens up beneath the party’s very feet as a mindlessly chewing stone mouth emerges, attempting to devour Egwene! With a roll of 9 she manages to roll away, unscathed.

With that commotion out of the way, they realise what time it is: lion o’clock.

Between the lion’s ground fighting and Dave’s ability for strategy, it’s a cagey start to the fight. The showdown takes place amongst tall grass, a toppled pillar, acanthus plants, and a rather fetching giant stone face (thanks Dave).

The white lion starts with its mood card GROUND FIGHTING in play, so stays where it is and waits for its prey to come to it. Let’s hope for everyone’s sake that the whisker harp (which allows us to remove a mood card on a successful roll) can be used to our advantage.

Lanfear jumps atop the stone face for a boost to her ranged attacks. Egwene and Elayne spread out to flank the lion, biding their time. Dave indulges his penchant for gardening and gets in to harvest the acanthus.

Rinse and repeat: ground fighting is still in effect and Egwene, Elayne and Dave all hang back.

But what’s this? Lanfear breaks the deadlock, hurling darts into the beast’s brow. The wound draws it forwards, snarling, but it can’t reach her perch.

Ground Fighting is no more…. game on!

The lion wants to MAUL someone but can’t decide who, so sniffs the air, making everyone a potential target next turn.

Egwene goes for the lion’s ribs with her axe but even her specialisation with the weapon isn’t enough to do any damage, fluffing her damage roll twice.

Dave brings his Katars to bear next, magnificently screwing up a procession of rolls and effectively really annoying the lion by waving his hands at it.

Unsurprisingly, it bites him (in the arm and head, though at least he’s wearing a helmet).

Elayne moves closer so she’s easier to eat, while Lanfear completely misses with her bone darts.

The white lion pulls GRASP. Even though this is only a basic AI card, it’s fairly devastating and always forces you to adapt to the consequences.

The lion first wounds Egwene then drags her off to the dark recesses of the board, knocking her down and damaging her body armour.

Dave is not keen on this, moving to the side of the lion and giving it what for. He rolls a massive one hit (to the lion’s elbow) out of a possible four. Dave, you suck. You really do.

The cracking sound of the lion’s elbow breaking gives all non-deaf survivors +3 insanity and causes all knocked down survivors to stand up. Huzzah!

Egwene, freshly revived from the breaking sounds of elbows, moves to the blind side and attacks with her faithful axe… it’s a trap! Balls.

She becomes doomed, and on the receiving end of a 2-speed attack to boot. After evading one, she takes a heavy wound to the legs and gets knocked down.

One positive to come from this is that the lion has turned around, allowing Elayne to reach its blind spot and finally join the fight! Unfortunately, she fails to wound either the beast’s brow or strange hands. Lanfear takes aim from atop the stone face and… also achieves nothing.

The lion draws SMART CAT, meaning the top 10 AI cards are drawn and any mood card is put into play instantly. None appears, so smart cat is instantly archived. Result! The next card is drawn, which is CHOMP. Ah.

The lion wastes no time getting its teeth into Dave’s head. Luckily, his skull helm comes to the rescue again, and showing remarkable pluck, he encourages Egwene to stand back up.

Egwene needs no further encouragement to have another go at missing the lion horribly.

Dave then shocks everyone by attacking the lion with his ridiculously fast katars and actually connecting, scoring a critical hit on its tail!

Nobody is more shocked at this than Mr Lion, who is now at -1 accuracy for the rest of the fight.

Elayne follows up with an attack to the flank of this alabaster bastard, wounding its scapular deltoid. A missed swing at its back startles the lion into moving at full speed away from the survivors.

Lanfear has bone darts so the lion legging it makes no difference to her, and she proves it by shooting a dart into the beast’s elbow.

The White Lion draws GROUND FIGHTING and hunkers down again, waiting for its prey.

Lanfear reverts to type by throwing a bone dart into space while Egwene, Elayne and Dave, wary of ground fighting, move up into position without attacking.

With GROUND FIGHTING still in play, and the lion still not moving, Lanfear casually slings another dart its way. She hits! The beast is wounded and Ground Fighting buggers off to the discard deck.

Dave decides to use his favourite combination of blind speed and katars, emphasising the ‘blind’ bit for a poor return of only one hit. He only goes and makes it a critical – right to the beast’s temple!

The lion gains a persistent Injury, and every time an AI card is drawn from here on out, we have to roll a d10. On a 1 or 2 that AI card is discarded!

Egwene move to the blind side and attacks with her bone axe, wounding twice.

Elayne moves to the flank of the White Lion, ready to make it a perfect round, and… chokes, missing completely.

Guess what? You’ll be shocked – it’s our old friend GROUND FIGHTING! I think this lion might be tired.

Proving to the lion that lying down on the job is a bad idea during a showdown, Lanfear piles another dart into its knee from afar. Improbably enough, it’s another critical. Not only is the lion now reduced to basic actions, it has -1 movement to boot.

Egwene moves to the blind spot, hoping to use her bone axe to apply the coup de grace…

And buries her blade right into the lion’s fuzzy groin! The lion is DEAD! After that, it’s probably a mercy.

In the end, this hunt was almost easy – the fight starting off with ground fighting allowed our survivors to gain positional advantage. That said, without a ranged attacker, it would have been far more difficult, especially with the somewhat inconsistent rolling.