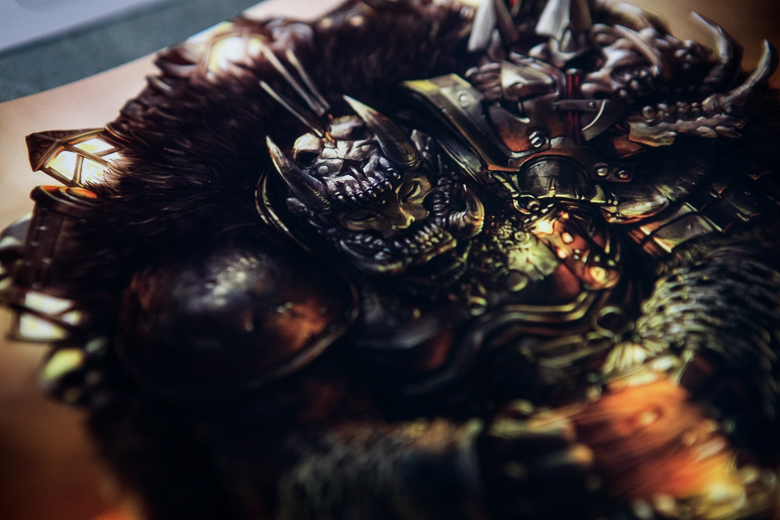 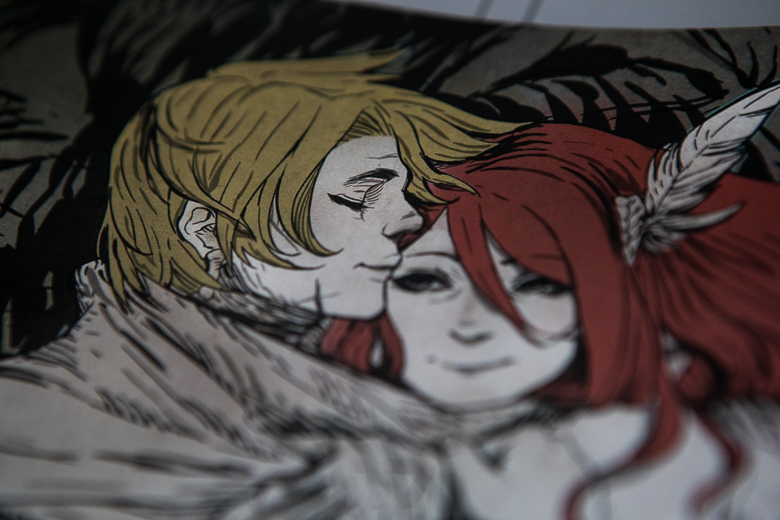 Fresh from an improbably simple fight against a White Lion, the plucky adventurers of Edmond’s Field have returned home. Doubtless they think that everything from here on out is going to go swimmingly.

But let’s not forget that this is Kingdom Death: Monster, where even the simple act of going swimming probably involves interdimensional death worms. At the very least, there’s probably an armoured cleaver-wielding manic, waiting outside to ruin your day. Oh… spoiler.

The survivors get home, patching up their wounds and settling down to spend the Endeavour they’ve accrued.

The party is in full swing when someone mentions that the clouds might make barbecuing a bad idea. They’re right, because it quickly starts raining, but what’s this? Oh, of course – it’s acid rain, because obviously.

Egwene runs off into the acid storm for a round of heavy exfoliation and skips the next event.

With nothing to clear up because the rain melted all the garden furniture, the settlement puts its mind to innovation. It comes up with the idea of lovely little two up, two down Hovels, with plenty of space to extend the kitchen out the back.

The survivors then create a King Spear and Cat Eye Circlet (finally). They rustle up some Monster Grease too, a consumable resource that gives more evasion during a hunt.

It seems like a good time to swig some more love juice to trigger intimacy. Eddie and Moraine have been getting on famously of late so they decide to have a dram and see what happens!

Oh. Shit. Moraine and the baby die during childbirth. Eddie gains +3 insanity and a fear of the dark, meaning he can no longer go out on hunts.

Those who are left trade stories to gain experience. Lanfear learns the Last Man Standing fighting art, so can’t be knocked down when she’s the only survivor on the board.

With that concluded, it’s time to head out on the next hunt!

Except that’s not an option, as when Elayne, Lanfear, Statue and Dave step outside, the Butcher is waiting.

Now, we’ve heard that the Butcher is something of a step up from the usual showdown. But that’s brought into sharp focus when his traits are revealed.

Infectious Lunacy: this can result in the survivors gaining frenzy brain trauma

Berserker: the worst of the lot, meaning the Butcher draws an extra AI card each turn

Dreaded Trophies: the Butcher gains a buff for every survivor he kills

Statue hops onto the giant stone face. Lanfear moves to hit the Butcher with her newly acquired King Spear. She hits twice but the Butcher has a ridiculous toughness of 9, so just wounding him is going to be quite an issue.

Somehow she wounds his armoured pig shoulder! The other hit is to the cleaver – it’s impervious and Lanfear gains +1 insanity for the audacity of trying to even hit it.

Dave slashes ineffectively with his double katars at the Butcher’s thick cape but rolls a crit on its mask! The Butcher suffers a wound and -2 toughness until the end of the round.

Elayne dashes into the Butcher’s blind spot. She aims at his furious gauntlet but, intimidated by the monster, misses. A quick roll to see what she suffers – we have to roll below her courage on this one – and it’s… nothing! Elyane, you are nails. Terrible rolling goes two ways!

It’s now the Butcher’s turn, immediately shuffling his hit location (including the discard pile) deck because of FAST TARGET.

First, she loses an eye (-1 accuracy permanently). The second hit knocks out a tooth. But Elayne being utterly solid, she spits it back into the Butcher’s face without missing a beat. That’s +2 insanity for her!

(This is the single most badass moment of the game and sums up why we love it so much. It’s amazing how the characters develop a unique personality despite essentially being a culmination of dice rolls. Elayne has been with us from the beginning. She lost an arm not long ago, and in facing her biggest foe has just lost an eye and a tooth at the same time. Does she cower? Does she run away? No, she spits it back into the face of this 8ft tower of insanity in utter defiance. We love you Elayne.)

The Butcher’s WILD CARVE is next, leaving Elayne bleeding and hitting Dave too. Elyane is a haemophiliac, so she’s knocked down.

Lanfear drives her King Spear into the Butcher’s furious gut – knock down time for you, Mr Fatty! Her second swing bounces off the ridiculously tough furious breastplate so she encourages Elayne to stand up instead.

Statue is still on the giant face away from the fray. He’s doing some watercolour paintings of the landscape (mainly black) and eating a lovely packed lunch.

Deciding to get involved, he lobs a bone dart at the Butcher’s furious scrag – a location that ONLY allows a crit. If that works, it’s an immediate kill, but unsurprisingly, he misses.

Elyane runs in, scoring three hits on the prostrate monster… which sounds great, but I smell a trap coming. Please don’t be a trap… no traps! Let’s give him a kicking, true pub car park fight-style.

She wounds his furious gauntlet and steps back. Dave jumps in, scoring a huge four hits – aka trap bait. But… NO TRAP!

Dave wounds the Butcher’s furious greaves, bellow and crown, even avoiding a fail reaction as the Butcher is on the floor.

Except that now he stands up. Uh oh.

The mood FORBIDDEN LIGHT comes into play, automatically drawing an AI card (KICK) that targets Elayne. Again. She takes blows to her arm and waist, and adding insult to injury, she’s hurled backwards. The Butcher then wades in to attack with his basic action but misses her both times!

The next AI card is DOUBLE HACK. That does not sound good.

Elayne has taken every single one of the Butcher’s attacks so far. She’s lost an eye and a tooth. If she loses any more blood she’s going to bleed out and die in this desolate wasteland. Not a lot of fun.

There are now just four AI cards left in play. Dave immediately spends one survival to stand Elayne back up. Deciding her one-woman direct assault might be over, she retreats back to the group and bandages her wounds.

Statue is way out of range so instead plays his Whisker Harp to remove the mood card in play. Lanfear is also too far away so uses the Cat Eye Circlet to see the future.

Dave isn’t having any of this damn hippy festival. He moves at full speed to give the Butcher what for from the blind spot. What a guy.

He wounds the furious greaves and misses the bellow, but avoids a reflex action because he’s so damn brave.

The Butcher decides to stick with a winning formula of KICK and BITE. He boots Elyane, wounding her body, knocking her back and triggering his basic attack. She dodges one further blow but gets knocked down by another, reopening her bandaged wounds.

In a small mercy, she’s no longer a threat so the Butcher turns to BITE Lanfear. The crunch of tooth on skull concusses her, causing more bleeding and giving her the hoarder disorder.

Lanfear backs off so she can miss completely with her spear.

Statue helps Elayne up and, having finished his packed lunch, miserably jumps off the stone face to get into range. He misses, of course.

Dave dives in, wounding the furious greaves and shoulder – and being a katar specialist, ignoring a reaction into the deal.

But then it’s the Butchers turn. Drawing FORBIDDEN LIGHT, he launches a series of brutal attacks on Lanfear that leave her bleeding heavily and badly wounded.

But on the plus side, he’s one wound away from death!

Statue, having had zero impact on the entire fight so far, decides to wade in. Not that he’s a glory hunter or anything.

A solitary bone dart leaps from his fingers, hitting the Butcher’s furious gut and… wounding it! The Butcher is dead!

The survivors gain five broken lanterns, and we all have to go for a lie down.

To be honest, we were incredibly lucky not to lose anyone in that fight. Lanfear was just one bleed token away from death (twice). These Nemesis showdowns are tough!