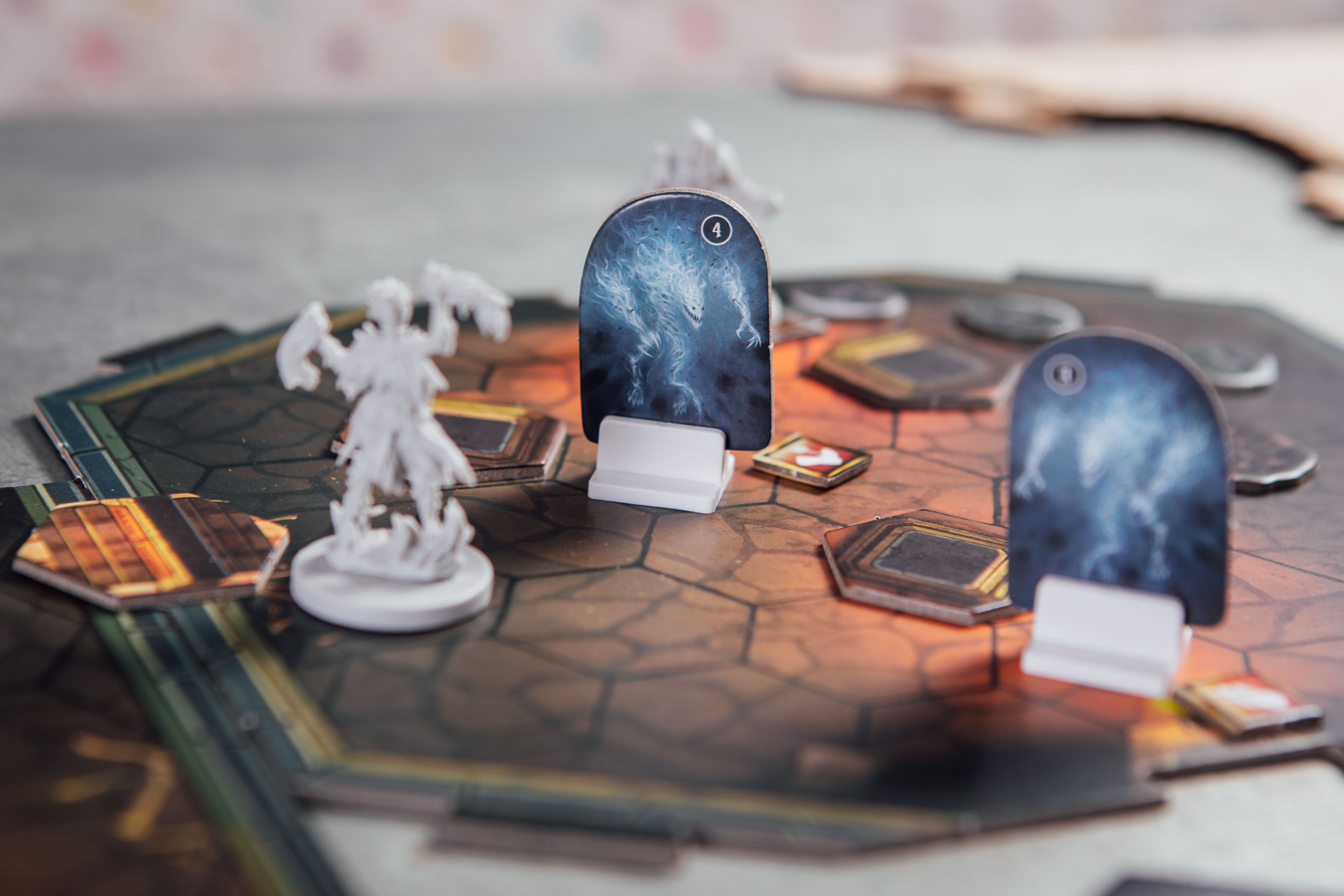 Crystal wizards and magic jazz in the Crypt of the Damned: Gloomhaven scenario 4

Our Gloomhaven saga continues with a foray into Scenario 4 – the cheery-sounding Crypt of the Damned!

Look. Last time we played Gloomhaven, things didn’t end on the high note that one might expect. We unwittingly attacked a village full of innocent people/Inox/horn-people. Don’t you just hate it when that happens?

Concerned that our party might be the bad guys and possibly wanted for murder, we opt to dodge the issue. For our next scenario, we head out to get some country air in the wilds surrounding Gloomhaven.

(We picked up a brochure a while back for somewhere that promises the perfect blend of R&R and moderate violence.)

‘Fantasy Trip Advisor says that the Crypt of the Damned has glorious views overlooking the Still River and a shabby chic ambience to die for’, explains the Spellweaver.

‘Sounds like just what we need,’ replies the Cragheart. ‘Also, we can’t get in trouble for brutalising things if they’re already dead… can we?’

No road trip is complete without supplies, so we dash to the shops before heading out. More accurately, we promise a dodgy bloke in a pub that we’ll look out for something on the road, and then bugger off again sharpish.

On the road, we see a family of deer happily minding their own business. Our newly-adopted pacifism means we’re happy to just watch them gambol, which for once turns out to be the right decision. We let someone else shoot them instead! This is doubly great – for one, we bang some Bless cards into our deck for the next scenario. Arguably better, we make friends with the Inox who was hunting them! That basically offsets all the village razing, surely?

Welcome to the Crypt of the Damned: enjoy your stay

Things are much less rosy when we rock up to the Crypt of the Damned.

There’s no record of our booking, for one. Adding insult to injury, the receptionist tries to stab us in the face. Also, I think the skull décor might be real… is this even a hotel?

Ah well, pacifism was nice while it lasted but leopards and crystal wizards don’t change their spots. We get busy with the violence.

There are two Living Bones backed up by a Bandit Archer, and as always, staying clear of everyone is the order of the day. It’s a shame nobody told the Cragheart. He lumbers in for a for a punch up while the Spellweaver’s magic crackles in the air from afar.

Despite taking a hit or two, Craggy’s plan becomes apparent when he reveals that he’s teed up his Heaving Swing next turn. This belts an enemy into the nearby trap for extra damage and some XP, much to his glee.

The remaining enemies drop quickly as Craggy leaps through the doorway, much to the consternation of the Spellweaver. It’s almost as if ol’ stony has a battle goal that requires enemies to be on the board at all times…

But haste is so unbecoming. It especially doesn’t suit Mr Cragheart. He blunders into a room packed with enemies who promptly use him as a punching bag.

The Spellweaver wastes no time in… powering up her own attacks. Unlike the Cragheart she’s in no rush, presumably ignoring the sounds of a comedy punch up next door while filing her nails and whistling.

In the next room, it’s very much on, as a mixture of Cultists and Bandit Archers pose a few problems for the slow and steady Cragheart. He’s doing his best to do some damage but doesn’t get very far until the Spellweaver and her summons show up to even the odds.

Finally, a few actions follow in quick succession that have us shouting with glee. The Cragheart lobs rocks at a Cultist, doing some damage but failing to finish them off. He (it?) watches through his fingers as the Cultist… stands still. What are they doing? Oh… just raising the undead. Oh dear. I didn’t know they could do that.

But our groans turn to whoops as the Spellweaver steps up. She throws some powered-up magic jazz at the mass of enemies, killing the Cultist (and then some).

And then, the Cultist blows up.

It takes most of the other enemies with it. It’s brilliant, and we’re laughing about it too much to take any more photos.

Our heroes split up. The Spellweaver heads north while Cragheart is forced to be more methodical because his top speed is about 0.5 miles an hour. He opts for the closest door instead.

This is a terrible mistake, as he opens it onto the huge, snarling form of an Earth Demon. Craggy is forced into being the world’s worst bullfighter, dodging the melee attacks of the monster while whittling it down. It… takes a while.

The Spellweaver has used this time wisely. She’s taken a gentle stroll towards the last room, pausing to summon Aid From the Ether and refresh her cards.

Sensing the opportunity to gain any further money or XP slipping away from him, the Cragheart risks one last big hit. His Avalanche crashes down on the Earth Demon, taking it out of the fight.

He wants nothing more than to open the chest he can see. Problem is, he’s so slow that getting there and back is going to take him out of action for ages. With a sigh, he leaves it be and starts huffing and puffing up the corridor to the Spellweaver.

By the time he gets up there the Wind Demons have already made it out of the box. The body of another Cultist already lies on the floor and the Wind Demons themselves aren’t looking too happy.

‘What took you so long?’ asks the Spellweaver, oblivious to the sound of her summons‘ horrible demise nearby. ‘I’ve even had time to post a scathing review. The Crypt of the Damned: poor service and worse coffee.’

The Cragheart is too busy panting and bleeding to respond. Sullenly, he strolls over to the chest at the back of the room, determined to salvage something from the day.

It’s a giant tick! Even the monsters look mystified by this, but the Cragheart knows. He smiles a secret smile, and stops moping because he’s screwed up his battle goal. He’s got a perk coming his way…

But first, there are monsters to kill! Luckily, one is immobilised, and the other one is bleeding.

Finishing them off is actually a fairly simple matter. Not simple enough that Cragheart can pick up the chest he missed earlier, but them’s the breaks when you weigh as much as a BMW, we guess.

One Thought on “Let’s Play Gloomhaven: Scenario 4 | Crypt of the Damned”