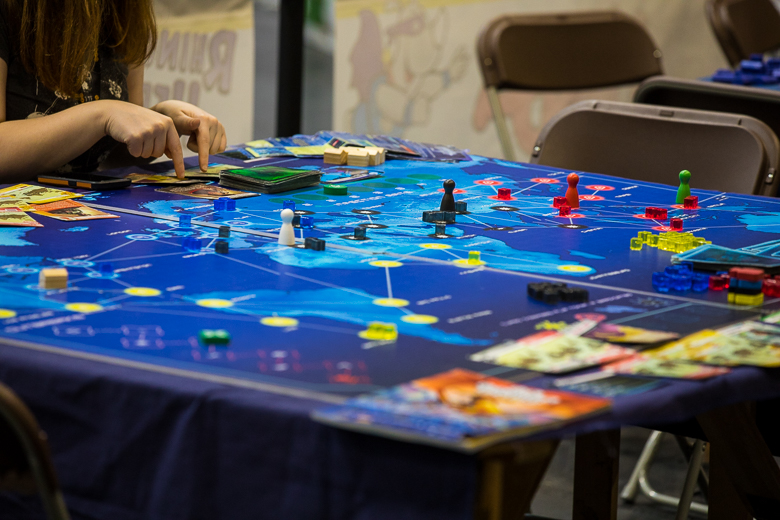 ‘Watch out, the press are here,’ laughs the friendly woman on the gate of the UK Games Expo (UKGE 2018)  as she spies our badges.

She mimes fanning her face and waves us through as we grin inanely back, clutching our passes like talismans. We step forwards, acting like we know what we’re doing.

It’s a first for us, whether as Boards and Booze or in our civilian incarnations. We’ve never had the pleasure of making it to UKGE before (or any gaming con, for that matter).

We’re determined to make the most of it.

As we stroll into the first of two halls there’s no getting over just how damn big UKGE 2018 is. We walk straight into the early heats of Fantasy Flight Games’ (FFG) X-Wing tournament. Table after table stretch out in front of us. There are hundreds of enthusiastic gamers and even more tiny spaceships.

The tournament timers nearby shame us with how slowly we play our own games but it doesn’t matter. (Nobody needs to know that we once spent seven hours on a single game of Armada.)

We marvel at ships we’ve never seen in the flesh (plastic?). We smile and nudge each other at the laser pointers and custom acrylic tokens.

At least one player clearly doesn’t understand why his fully-painted Armada squadron of A-Wings is cause for such excitement. When we set eyes on the epic scale X-Wing ships, our slack-jawed appreciation makes us look like gaming novices.

The atmosphere is electric, and we stride deeper in, probably more wide-eyed than many of the children here.

We don’t feel like press, you see: not at UKGE 2018. For once, the pass doesn’t feel like a job: it feels like Willy Wonka’s golden ticket. It’s entry to wonderland.

Given that it’s a first for us, we’re not sure what to expect, and by god, there’s a lot to take in. It’s no criticism when I say that the first impressions of UKGE are more than a little overwhelming.

We see giants (no, not actual giants – although the cosplay was good) of game design walking round the halls. We sit next to some of our heroes but we’re too horribly British to interrupt and say hi. At demo tables, we linger shyly at the periphery until yet more friendly people invite us to join in.

In short, we spend the first hour or two fully expecting someone to see through our disguise, drop a heavy hand on our shoulders and escort us out.

By the time lunch rolls around, we remain un-ejected and the penny has started to drop. Maybe we do belong, after all? Maybe we’ve found something we didn’t even know we’d been missing until we got here?

While we’re in a confessional mood, here’s another revelation. We’re just not used to this level of love.

Tangled up by all the welcome complications of our lives – young families, home ownership and ‘real’ (paying) jobs to name but a few – our gaming circles have become somewhat static, over the years.

They’re broad, but they’re insular. Oh, we’ve not been complacent: it’s taken years to wear down partners, friends, colleagues and family members. But we’d almost forgotten the joy of playing with strangers.

I think that’s the true revelation of UKGE 2018 – for us here at Boards and Booze, at least.

It’s not the competitions or the discounts, or all the shiny new things. Let’s even put aside the games – all the games – for a moment.

We went expecting all of those things, as I’m sure many of this year’s 39,000 visitors did. And we found them.

But we found something more at the same time. A reaffirmation of the real reason we love board games at all: people, brought together by the joy of play.

There’s always a buzz when human beings come together, sharing a passion. UKGE 2018 was no different. But what did set it apart is the backing of an industry that’s so evidently as much in love with gaming as its customers.

We walk around the halls and see that passion spill over into vibrancy, innovation and enthusiasm, and it’s a sight to behold.

But you don’t need me to tell you that. Just as UKGE 2018, growing at something astonishing like 20% on last year, doesn’t need me to couch it in some sort of greater global relevance. Without anything to compare it to (is that poor journalism or just a plea for comments?), it’s hollow posturing anyway.

All I can really leave you with is how it affected us. It’s the most subjective take we have, and certainly the most honest.

We loved every overwhelming, exhausting, love-affirming moment of it.

So, with that in mind, a return next year is a dead cert. We’ll be back at UKGE in 2019, with bells on. You should be too. If it’s your first time, don’t worry: you probably won’t be more overawed than we were.

Look for us there. We’ll be the ones waiting shyly to be invited to join in, or pointing like children at plastic spaceships.