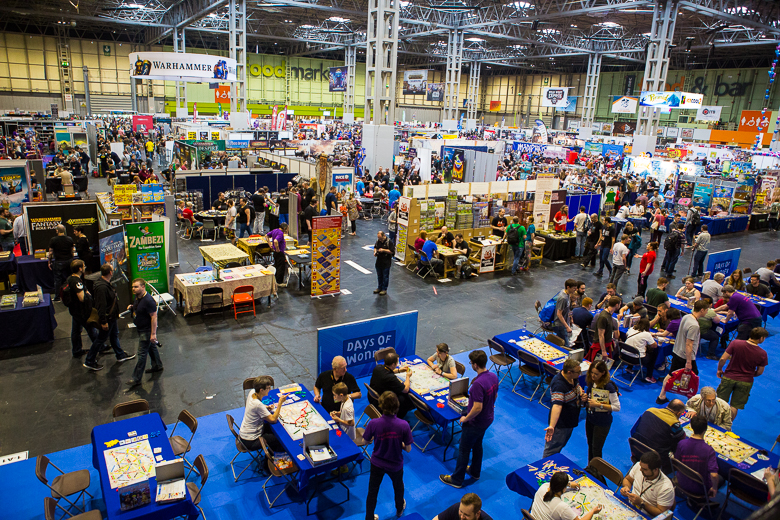 UK Games Expo 2018: board games we loved from a show that blew us away

Every single authority we can find has told us just how the UK Games Expo is going from strength to strength.

This was our first year at the show ourselves, and we can find no reason to disagree. It was a supremely-run organised three days of great events, better company and some truly outstanding games.

Popping our UK Games Expo cherry was long overdue, and make no mistake – we will be back next year! While we think wistfully ahead to our return trip, let’s look at the games that caught our eye in 2018.

Some have been out for a little while but we’ve not been able to lay hands on them until now. Others are still gliding towards release. But oh my word, they are all EXCITING. So many of them are stepping into new territory that we defy anyone to to play them and not marvel at where this medium is headed.

Read on and embrace the excitement. What’s the opposite of buyer’s remorse?

Look. We know we’re late to this party. We don’t care. We’ve played it now and we’re in luurrve.

Fog of Love blew us away. It’s billed as a romantic comedy of a board game but that’s a bit like describing space as ‘quite big’.

It’s a game about relationships; about the awkward pirouette of two people trying to keep each other and themselves interested.

There’s no single way to approach Fog of Love. It can be played as a serious exploration of how two people’s desires interact (or don’t). More likely, it can be played for laughs, revelling in the train-wreck comedy of mismatched romance. It manages all this with a deftness of touch that makes you forget you’re playing a game.

There are rules and structures in place, but they’re not heavy or obtrusive. They fade into the background, even as they drive the narrative forwards. But don’t be fooled. The mechanisms lurking at the heart of Fog of Love are as thoughtful and balanced as any you’ll find.

Just don’t blame us if you find yourself making less than ‘optimal’ choices because the story comes first. And don’t blame designer Jakob Jaskov either: that’s precisely how he wants it. Did we mention we met him? He’s lovely: Fog of Love’s runaway success couldn’t happen to a nicer person. He even coped with our gushing compliments without trying to escape or fake his own death. And that is high praise.

Fog of Love is infuriatingly hard to get hold of the UK at the moment but we have it on good authority that it’s going to get much, much easier to acquire very soon. When it does, you should totally buy it.

We had more fun than we care to admit channeling our inner Smaug in Dragoon. It’s light, plays fast, and you get to be a fire-spewing, village-razing dragon. What, you want more? We don’t need to tell you that it’s just gorgeous to boot.

Dragoon leans undeniably towards the casual end of the scales but there’s just enough bite in there to satisfy someone looking for a ‘proper’ game. We can see it being a smash hit with the right families, or groups of less- hard-bitten gamers.

Make sure you don’t take it all too seriously, revel in the one-upmanship of the action cards and embrace its reliance on the dice and you’ll be roaring with laughter.

Following a successful Kickstarter by Lay Waste Games, Dragoon is soaring to a full retail release in the autumn. Whether you go for the expensive but oh-so-tactile metal version, or save a few pennies on the plastic one is up to you. Either way, it’ll be great fun to pick up.

3. Holding On: The Troubled Life of Billy Kerr

You don’t want to know what we had to do to find out more about this game. The play sessions hosted on the stand were rammed from first thing in the morning to close of the show… every day.

The titular Billy has suffered a massive heart attack, and as the medical team responsible for his care, it’s your job to keep him alive. Or at least, alive long enough to make peace with himself and his life. And here’s the rub: you’ll reveal more of his memories and piece together his story as you play.

The theme is just so compelling, and it’s so intelligently, considerately handled that we’d defy anyone to engage with it and come away unimpressed.

When a game manages to tackle mature content without resorting to graphic violence or tentacle monsters, it’s worthy of note. Holding On not only comes across as thoughtful exploration of some decidedly grown-up themes, it does so on the back of a solid game.

If Hub Games’ promises of multiple timelines and replayability prove true, this is a game that will provide thought-provoking entertainment for a long time to come.

Holding On: The Troubled Life of Billy Kerr is scheduled for a winter/autumn release. We’ll be shouting a lot when we know more, don’t worry.

Ahh, there’s nothing like getting back to nature. Fresh air. Birdsong. The silent screams of trees fighting a ruthless battle for any scrap of precious sunlight.

OK: we might be hyping up the conflict a little bit but Photosynthesis’ struggle for arboreal dominance is still great fun. It’s an accessible game of area control, with up four players vying to populate a forest most effectively. And it uses sunlight as a resource! An actual sun counter moves round the board as you play, bringing with it a great sense of dynamism.

We’re not alone in enjoying this one. The combination of theme, artwork and taut gameplay made it a hit with audiences at this year’s UK Games Expo. It’s easy to see why. It’s clever, and it’s eye-catchingly different.

Photosynthesis became nigh impossible to track down anywhere in the hall after about two days. Winning the people’s choice award for Best Euro at the UK Games Expo was a dead cert after that!

Photosynthesis, by Blue Orange Games, is out now.

5. Practically everything on the UK Indie RPG League stand

OK, this is cheating, because technically the UK Indie RPG League covered a lot of games. But they had one stand, and they were all cool, witty, and engaging people, so for them, we’ll bend the rules.

We walked away with an Apocalypse-powered gothic RPG (Rhapsody of Blood by UFO Press) because we’re huge fans of the inspirations that it riffs off (Dark Souls, amongst other things). As soon as we have the chance we’ll be running an 18-certificate, off-kilter homage to Castlevania and Krull. But we’ll be damned if we don’t wish we’d picked up the equally-beautifully illustrated Spire, to go along with it. (And the second edition of Legacy: Life Among The Ruins, while we were at it.) 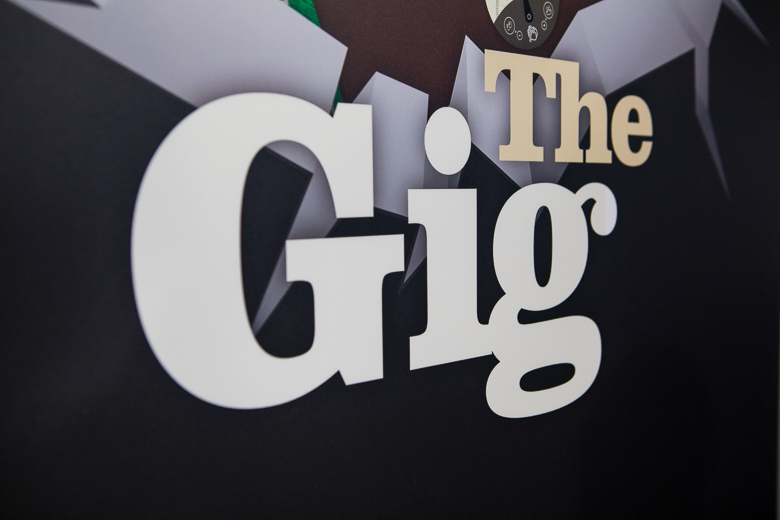 Who doesn’t want to be a jazz musician? (Don’t all shout at once.) The theming and design of this deceptively brain-burning dice puzzle game are absolutely bang on, turning it from a reasonably light strategy game into something unique and beautiful.

Each player takes on a different instrument, having to work together to finish a song and wow the audience. You could also steal the limelight with a solo, of course. This doesn’t just earn you big points. It will probably annoy your bandmates too, capturing the feel of being a lead guitarist perfectly. But with fewer drugs, M&Ms and groupies (unless you’re really good at it, presumably).

We can’t wait to play the full game when it releases from Braincrack Games this autumn. 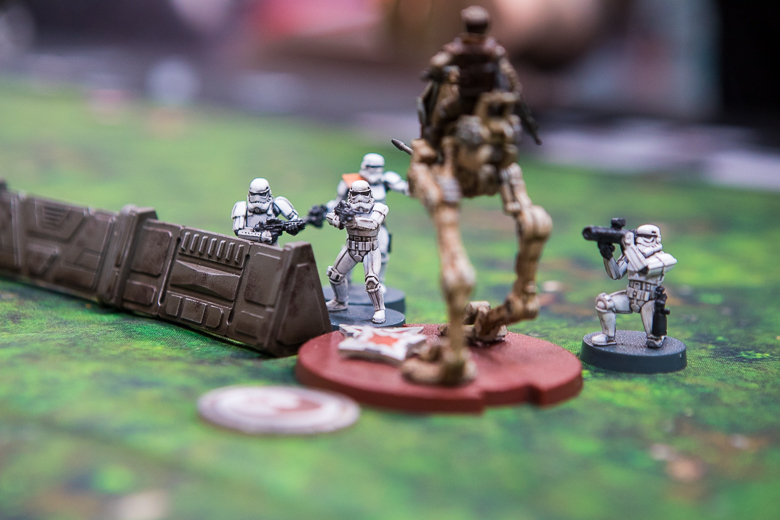 Fantasy Flight Games’ latest incursion to a galaxy far away looks gorgeous and seems like it plays smoothly. If we could have gotten away with stealing Fantasy Flight Games’ stunning Hoth table to play it on then who knows how many copies of the base game we might have bought? We’re still waiting to see whether this has the legs to rival X-Wing but the chance to see it up close and personal at UK Games Expo was a welcome one. 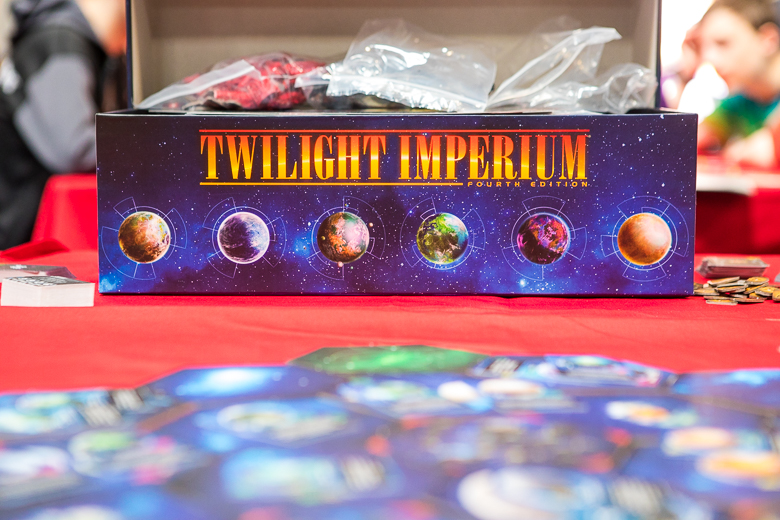 Whoever made the decision to demo the great white whale of tabletop gaming deserves a promotion. Yes, the sessions took a while but what better way to showcase the ultimate ‘event’ game than at the UK’s own biggest gaming show?

Sadly, we don’t think it’ll reappear at the UK Games Expo in future given how long it tended to pull people into its orbit for. But at least we can say we were there – and it was glorious. 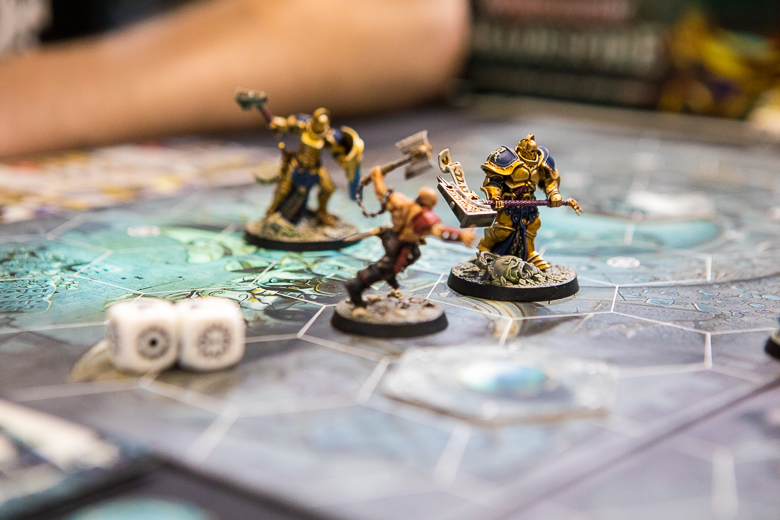 Shadespire is one of the latest quick-fire miniatures games-in-a-box from the mighty Games Workshop. Word on the street (at UK Games Expo) is that it plays quick and is a lot of fun. We couldn’t tell – it looked great but securing a spot at the table was easier said than done!