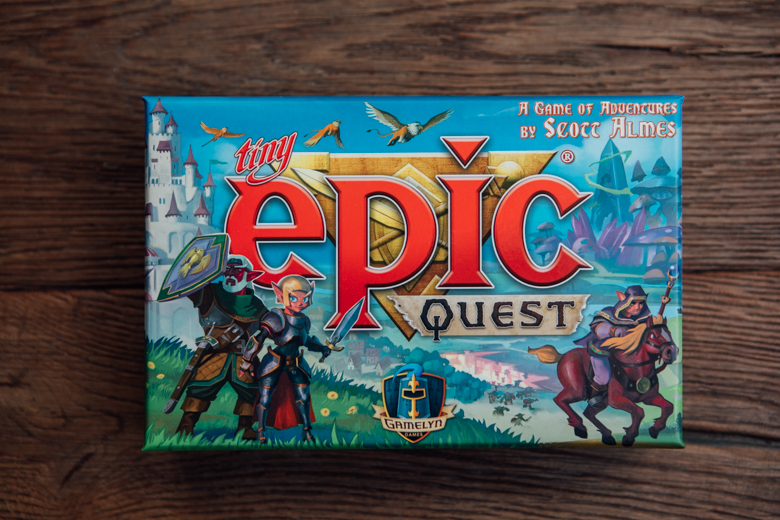 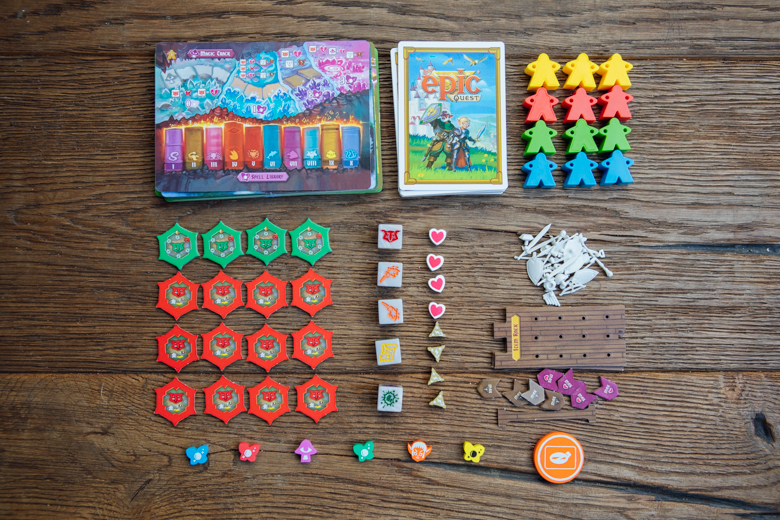 Let’s get something straight. Tiny Epic Quest is supposed to be small. It comes in the now-expected neat little box from Gamelyn Games that promises a wealth of gameplay in a teeny-tiny, cute little package.

It’s not supposed to spill out from that box like the bottomless porridge pot, swamping all available table space in a wash of brightly-coloured cardboard and little wooden tokens.

No matter that it’s all frankly delightful: even if you’re familiar with the amount of game that the Tiny Epic series wedges into its boxes, prepare to be impressed, surprised, or just in search of a bigger table with this one.

This component explosion notwithstanding, there’s still an argument to be made that Tiny Epic Quest is economical in its design. Practically every component in the box is used in every game (unless you’re playing with fewer than four).

Even with that caveat in mind, once you’ve set  up you may be left wondering just how far the definition of ‘tiny’ can realistically be stretched.

… Did I just complain that there’s too much in the box?

Perhaps unsurprisingly then, this is a mechanically dense little beast. It’s actually not quite the sprawling, carefree sandbox adventure the back of the box would have you believe. Instead, it reveals itself as a much more considered affair from the moment you open the rulebook.

At its heart, Tiny Epic Quest is a tightly-designed hybrid that isn’t scared to make its players look past the primary colours to the challenge lurking beneath.

Those colours, though… they do lure you in. The game is gorgeous, and it shares more than a little visual design DNA with a certain very famous, long-running video game adventure series. 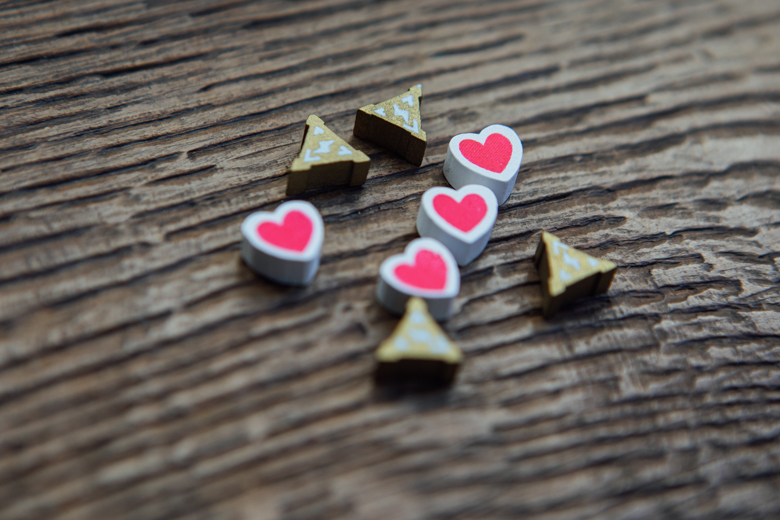 Make no mistake: the Nintendo homage is another step towards suckering you in. And once you’re in, it’s an experience that’s a lot more intricate than it likes to make out.

Tiny Epic Quest feels like a bird’s-eye hero management sim. It’s less the Legend of Zelda, and more Link’s Promotion To Middle Management. You control a team of three heroes, scattering them out from your home castle to have adventures and accrue victory points in the process.

The game plays out across two phases.

By day, players will use (and piggyback on) a pool of shared movement cards to spread their heroes across definitely-not-Hyrule, getting them into position for the serious business of questing.

Then, night falls and the real adventure begins as those gorgeous custom dice are rolled. The icons that come up are again shared between players; this time being used to explore temples, fight goblins and learn new spells.

Each of these contributes to players’ growing hoard of victory points, along with a string of continually-refreshing quests available for anyone quick enough off the mark to claim.

These quests generally come in one of two flavour. Many are movement challenges, requiring you to line up your heroes in specific ways. Others are invitations to complete temples… often earning the juicy reward of an item in the process.

These items are – three guesses – immediately familiar to anyone who’s ever even glanced at box art for the Zelda series. They don’t give you victory points but they do bring other benefits by tweaking movement, making it easier to fight goblins or advance along other tracks.

Direct player conflict doesn’t really exist, short of blocking certain key spaces, but that doesn’t mean there’s no interaction. Far from it, in fact. The pooled movement and dice sharing means that you’re always paying attention to other players’ turns. There is virtually no real downtime.

As stripped-down as the game’s two core mechanics ultimately are – a movement optimisation puzzle on one hand and a push your luck dice roller on the other – the sheer charm of the complete package stops the end result ever feeling dry or stodgy.

The power of presentation

It would be easy to argue that Tiny Epic Quest’s visual design is so much window dressing but – for us at least – it adds so much joy that it almost becomes the glue binding the game together. 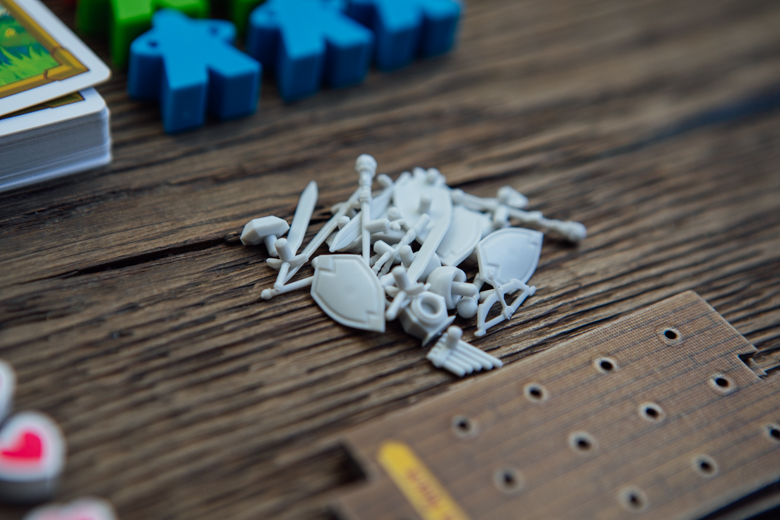 Which is good, because there’s actually a lot to get your teeth into here.

The rulebook has everything you need in it, but it’s either not terribly-well arranged, or the game is just a shade too complex. Tiny Epic Quest isn’t something you’ll be up and playing within five minutes of opening the box.

But when you do get to grips with the rules, ticking away inside this box like the workings of a beautifully intricate watch mechanism, the game becomes a joy.

It’s crunchy, and chewy, and a host of other words that sound more like I’m describing a particularly crusty pie than a board game. (It’s great, in other words.)

The thing with this pie is that it’s worth making sure you know what you’ve actually ordered before you tuck in.

Tiny Epic Quest isn’t an adventure game by the standards of stalwarts like Talisman or Runebound. If you go in looking for an experience that doesn’t ask you to engage your brain, you may find yourself pulled up sharp.

There’s no flowery prose on the quest cards here. You won’t establish a character backstory every time you play. You aren’t on the rollercoaster of random events that say, Eldritch Horror wants to throw at you.

Tiny Epic Quest is all about the optimisation. It’s much more calculating than it wants you to believe.

But guess what? Just when you worry that you’ve been sold something else, that great art direction becomes a factor once again.

It’s just evocative enough to establish a narrative framework for you to build. Your hindbrain will merrily get to work on papering over those gaps before you know it.

If you’ve ever played a Zelda game, those design choices tap effortlessly into the fingerprints left all over your subconscious by Nintendo. They bring Tiny Epic Quest’s world to life on your table, even as you optimise your movement and pray to roll just a few more scrolls. 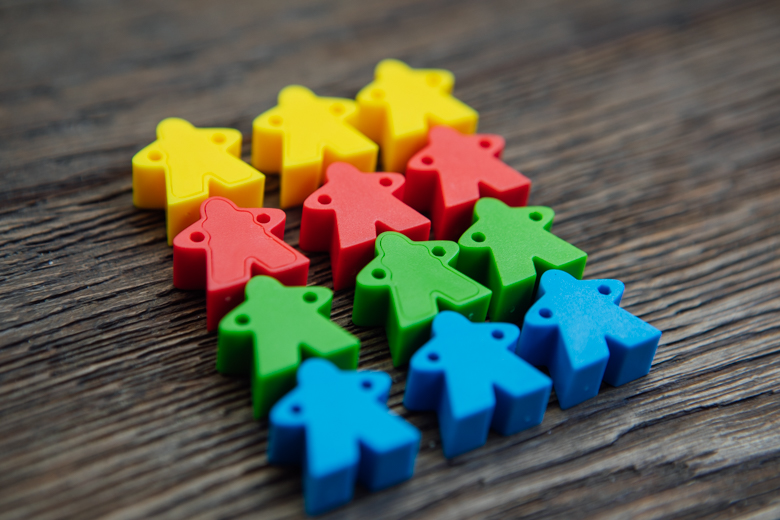 In a game where your meeples could easily be faceless victory point-generators, you’ll find yourself mentally stickering personalities onto them. This process is only helped by the items they’ll accrue as you play, which socket straight in to your plastic figures with buckets of charm.

Look at a table mid-way through a game, with an array of adventurers bearing swords, shields, bows or a host of other items, and tell me this game doesn’t tell you a story.

Don’t be fooled by its disarmingly accessible exterior beautiful facade. Tiny Epic Quest is a system with engaging, surprising depth.

It may come in a small box but it’s much more than a filler game, and it’s very much deserving of your attention.