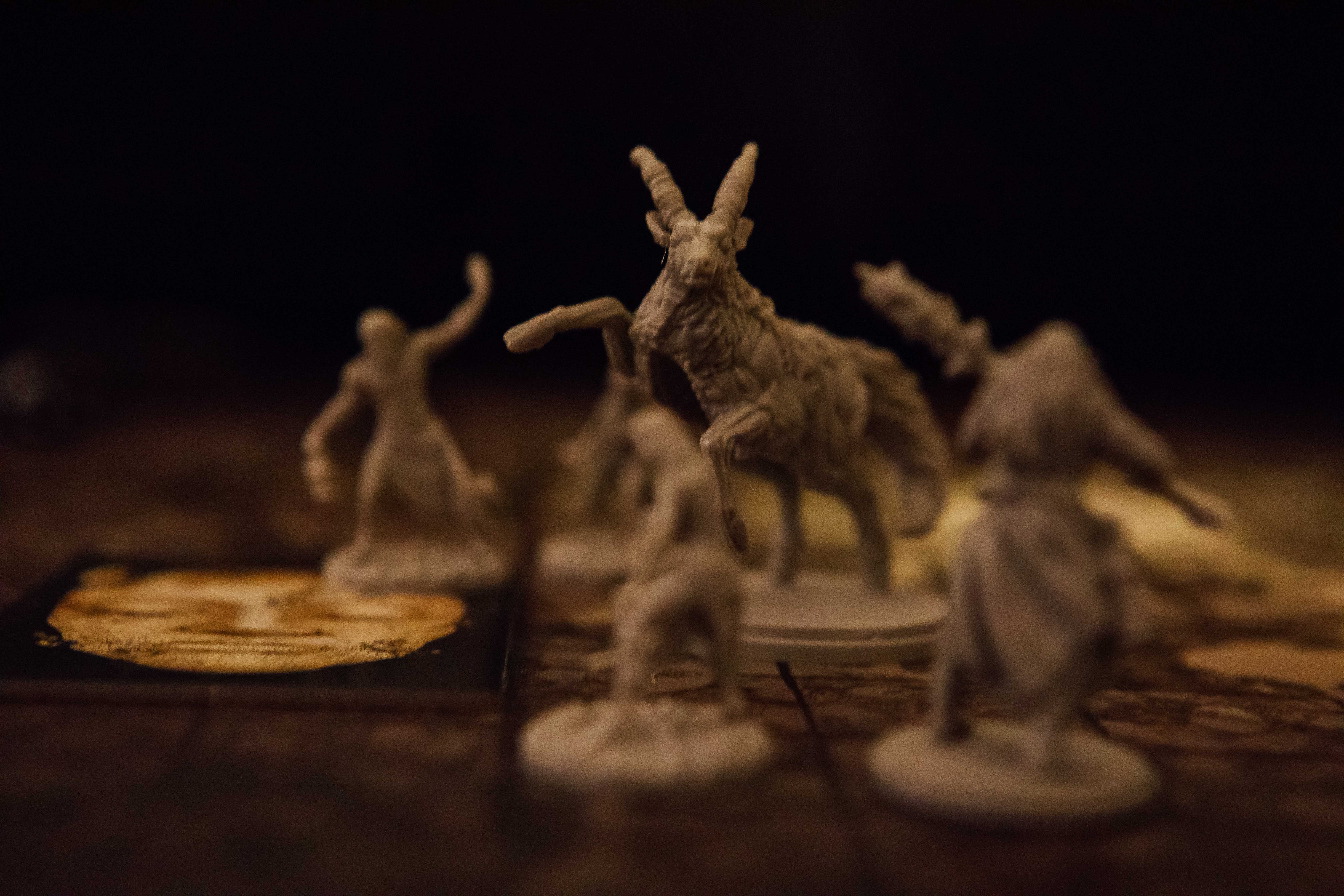 When we last left our intrepid band of adventurers, they had merrily killed a lion to death for the crime of nothing more than simply trying to feast on all their corpses. Ahhh, just another day in Kingdom Death: Monster paradise.

Heartened by a victory that only cost the life of one villager (RIP: Mat, we’ll miss you) the trio head back to town with a bag full of lion guts to cheer everyone up with.

Things are looking good at Edmond’s Field with endeavours being earned left, right and centre, thanks to the winning decision to bury the settlement’s dead in graves.

It’s not exactly quiet on the western front, however, as cracks start appearing in the ground, making the village a smellier, if not more dangerous, place to live. The bonus, however, is the discovery of another founding stone to add to the arsenal.

If the smell wasn’t enough, a cacophony of Endless Screams throws the whole settlement into disarray, understandably putting people off that evening’s episode of The Relentlessly Bleak and Evil Bake-Off.

Elayne emerges as the Voice of Reason for the group, gaining +1 courage and +1 understanding, and triggering her ‘Insight’ story event. Now she is not only the Kingdom Death: Monster equivalent of someone shouting ‘leeeave him, e’s not worth it’ at pub kicking-out time, she is also a tinker, gaining in accuracy and earning more endeavours when she returns from a hunt.

Oh, and also the Screaming Antelope is now available as a quarry! And that’s… great news! Why is nobody meeting my eyes?

The community excitedly gets to work turning those hard-earned resources into valuable equipment, creating rawhide vests, a rawhide headband, and the decidedly awesome Lion Beast Katars, which are all types of badass, and include the ability ‘deadly’.

One of the more unusual items in the game, in a game filled with unusual items, is ‘Love Juice’ which gets consumed immediately, triggering the ‘Intimacy’ story event. Intimacy requires a D10 roll (so romantic), which in this instance increases the population by one, proving beyond a shadow of a doubt that all those cautionary tales we hear growing up are true.

The community elects to rear children with affection, choosing to Protect the Young.

(Editor’s note: So far all of our survivors have been named after characters in Robert Jordan’s fantasy epic The Wheel of Time. Unfortunately, this writer, unlike the rest of Boards and Booze, has only read four out of the 14-book series so has reverted to the TV series Bottom for additional inspiration for names. Yet again, Robert Jordan, we are so, so sorry.)

With a few more endeavours spent on four stone noses, a group made up of Egwene, Elayne, Statue and Dave Hedgehog set out to find the source of that bothersome screaming… and with any luck, stab it in the eye. Or groin.

The hunt phase starts briskly with a skittish screaming antelope – presumably realising that ruining a good night’s TV is going to upset a lot of people – moving away from its hunters.

In the process, it startles a passing trollbird, which comes along for the ride but which will ultimately (thanks to a good roll) distract the antelope and allow our heroes to lay an ambush for their quarry.

Meeting the trollbird triggers an Insight event for both Statue, who becomes more accurate, and Dave, who gains a reroll ability for one hunt event.

After a ‘Chance encounter’ sees Elayne grow in boldness, becoming prepared and gaining +1 strength in the process, everyone stops for a sit down.

This is a bad idea. The ground is covered with a carpet of ticks, which is precisely as delightful as it sounds. Egwene simply cannot deal with this and loses all her survival (bugger).

Dave Hedgehog feels the hand of destiny on his shoulder, growing in courage as a result… and he’s right to do so as immediately afterwards the group find – and ambush – the antelope. SHOWDOWN!!

The start of this showdown is slightly different to previous fights due to Ambush and the fact that Dave has Strategist.

Ambush is a huge boost, as it not allows the survivors to go first but essentially allows them to ignore the initial setup conditions and place themselves where they like, with a few caveats. It doesn’t sound like a huge deal when you initially read it, but considering Kingdom Death: Monster constantly gives you advantages that turn out to be double-edged swords (sometimes literally), this really has no downside.

Strategist, on the other hand, allows us to place a few key pieces of terrain (including Giant Stone Face which allows survivors who climb it to gain a whopping +2 accuracy and +2 range for ranged attacks) where we like, as long as they satisfy the placement conditions.

This is the starting position. The survivors have ambushed the Screaming Antelope, with Egwene, Elayne and Dave surrounding the quarry. Statue has started on the Giant Stone Face due to the ambush.

Egwene starts out on the monster’s blind side, using her trusty bone axe to attack, scoring two perfect hits!

The second hit is Restless Back, where Egwene rolls a pathetic 5. Luckily the +3 strength modifier of the axe comes to the rescue and another wound is landed. With these wounds, Egwene becomes a Specialist in Axe!

Dave has really only just been born, but is not too young to learn that life is suffering. Especially in Kingdom Death: Monster.

You could say that Dave was born to being the damage dealer of the group, as he wounds on a 4+, but he nevertheless still fails to damage the antelope’s Giant Teeth.

He does, however, catch the antelope’s Restless Shoulder, causing the beast to foolishly leap away from Dave and create an opening for another survivor to hop in on its blind side again.

Miraculously, the trap card somehow remains undrawn. Whatever next?!

The antelope’s Furry Tail is wounded. Its Giant Mouth gets wounded. Its Restless Chest remains unscathed, but let’s not get greedy. Elayne, entirely appropriately, one feels, becomes a specialist in daggers.

Statue lobs his bone darts from atop the giant stone face, rolling a ludicrously poor 4, but with the extra accuracy from standing on top of a… giant stone face, still somehow manages to hit the monster’s Furry Throat…

With this, the survivors gain an additional screaming antelope resource and take stock, realising they’ve caused a deeply improbable (for Kingdom Death: Monster) SIX wounds in the first round. Time for the antelope’s revenge…

Monster: CHOW DOWN – This moves the Screaming Antelope at full speed to the nearest acanthus plant, where he will greedily chow down on it and gain 1d5 of healing. No chance.

Due to the ambush, we were able to set up the terrain as we saw fit, which ended up with the acanthus plants being placed at the four corners of the board – and out of easy reach of the screaming antelope.

This seemingly genius ploy hid a glaring tactical error: the Chow Down card is replaced on the top of the AI deck, rather than the discard pile, essentially leaving the antelope stuck in an acanthus-chomping loop.

With more movement than any of the survivors, this left little chance to hunt the screaming antelope down!

Dave steps up heroically to get rid of this problem, flinging his new founding stone to score an automatic crit – hitting the Restless Muzzle, and knocking the beast down.

Elayne and Egwene are both miles out of range so they move closer and join up with Dave.

Statue attacks with his bone darts. The beast is knocked down so only requires a 3+ to hit. Statue makes the roll, hitting and wounding the Gnarled Horn.

There are only TWO AI cards left. (How?!)

Monster: BOLT – Standing up, the monster targets Elayne, landing a perfect hit to her body, which is thankfully absorbed by her rawhide vest. It then pegs it, moving in a straight line away from the survivors at full speed.

Egwene moves to flank the beast, hitting and wounding the antelope’s Palate.

Statue flings his bone darts, and totally fails to do anything useful.

Elayne and Dave are out of range and guess what? Yes, they move closer.

Monster: BOLT – this time targeting Statue. Unfortunately this goes straight through Dave and Elayne, knocking them down and injuring their hands, and then going on to do the same to Statue’s hands.

It then buggers off again at full speed… as Bolt is now the only AI card left in the deck it may be tricky to pin the antelope down.

But all is not lost – Statue is still in his elevated position, and can still hit the antelope. In theory.

In practice, he fails to wound the beast’s Restless Tiny Hands, missing his next turn as a result of his ineptitude.

All actually is now lost, as Dave and Elayne are still knocked down, and Egwene can only move closer.

Monster: BOLT – but this time, Elayne is luckily out of range. (Finally!)

Egwene moves to the blind side and fails with both her attempts to hit, while Dave flanks and brings the incredible power of the Katars to bear by missing completely.

Elayne goes toe to hoof with the antelope, standing directly in front of the screaming antelope, and hitting it twice!

Unfortunately, she fails to wound its Restless Hoof, and has her dagger knocked from her hand for her efforts. She can’t use it again until she spends her activation retrieving it, and her second hit is cancelled to boot.

Statue spends his activation to regain the ability to attack next turn.

Monster: BOLT – Elayne takes a heavy hit to the arm, knocking her down.

Statue attacks with his bone darts, hitting Restless Eye. The First Strike condition and Statue’s insanity stops the attack in its tracks, so Statue simply spends one survival encouraging Elayne to stand.

Elayne is on the blind side and attacks, hitting three times and drawing the trap card! Hooray! Oh.

The trap card is Wailing Side, knocking Elayne down, back five spaces, and damaging her body badly. The Hit Location deck is reshuffled.

Egwene and Dave are out of range and move closer.

Monster: BOLT – once again targets Elayne, but misses! And then proceeds to run away. Again.

Elayne attacks, damaging the Restless Inner Thigh to reduce the beast to its basic actions as well as reducing its movement (thank the lord).

Dave and Egwene, out of range but sensing that victory is close, decide to pop in the other direction and do a spot of gardening on the Acanthus plants.

Monster: GRAZE (basic action) – In a desperate bid to heal itself, the screaming antelope bolts to the nearest Acanthus plant, but falls short by one space, almost as if we’d planned it. (Spoiler: we hadn’t.)

Dave harvests the Acanthus plant and gains one Acanthus resource.

Elayne attacks, hitting the Furry Thigh, and… wounding it!

The beast is dead – take that screaming antelope!

What new delights await the survivors next year? Read here to find out…