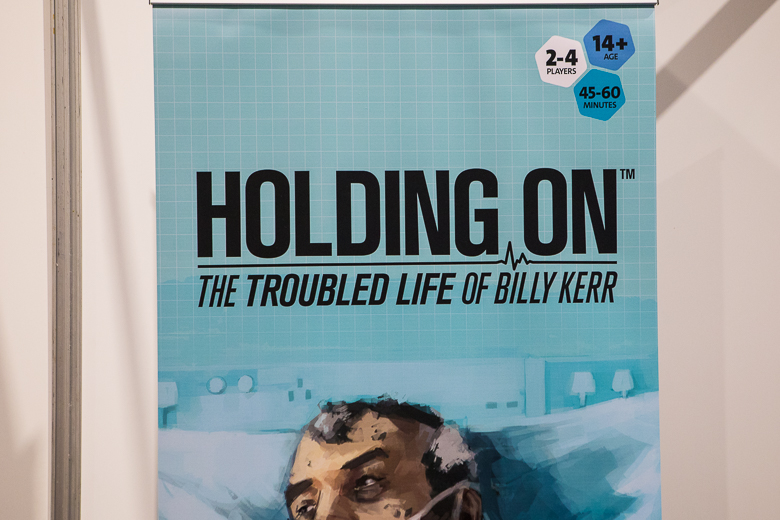 Holding On: The Troubled Life of Billy Kerr is, without doubt, one of the biggest upcoming releases of the year.

It’s also the board game we’re most excited – and fascinated – about by some margin. Thematically, it’s a far cry from your average board game. It meets concepts like loss and regret head-on as it challenges players to unravel the life of a critically ill man.

But don’t let that put you off! Holding On genuinely looks as if it could be one of the most beautiful and unique experiences to come out in years.

Most of our direct experience of it comes from shoulder surfing at conventions, admittedly. (Elbowing our way through the throngs of people surrounding the Hub Games stand counts as shoulder surfing, right?) With only three copies in the world at the time of the UKGE, getting hands-on time was easier said than done.

But no more! The game is slated for release at Essen in October, so the wait is nearly over. We’ve been lucky enough to catch up with one of the game’s designers in the meantime.

What’s Holding On all about?

You and your fellow players are the staff in a medical facility, and you’re tasked with looking after a man named Billy Kerr after he was rushed into your emergency unit the previous night. He was on a flight from Sydney in Australia to London in the UK, but while travelling had a massive heart attack – the plane was diverted, he was taken to your facility, and the story begins.

Over the course of ten linked scenarios, your team and Billy learn to trust each other. You eventually learn his whole story – where he was going, why he was heading there, and whether or not you can trust everything he tells you…

If you boil it down to mechanisms, it’s a rules-light co-op worker placement game interwoven with some pretty impactful emotional storytelling. While it’s actually an accessible game to play, you’ll have to make some difficult decisions as you progress through each section of the game.

It’s quite a serious topic – were you ever concerned the game would be depressing?

Oh, of course. It deals with illness, loss, death and sadness, so there’s always the risk that it can be seen as depressing.

We’ve already had a few people come to us and say ‘I’ll never play this, it’ll just get me down’, but there’s actually a lot of joy and positivity in Holding On.

In all honesty, if you look at what life is like in your average hospital, there’s not a lot of time for introspection and depression– everyone is far too busy looking after their patients.

We’ve emulated that in the game because you’ll rarely have enough staff to handle everything. You’ll be stretched thin, you’ll get stressed, you have to use your shifts wisely – but you do get those brief snatches of time where you’re given respite.

At the end of each round, players get to take a moment and share what they learned from Billy that day, so each round (hopefully) ends with an up note. And when you manage to achieve your current scenario’s objective, it’s an incredibly satisfying moment.

Where did the inspiration come from?

A lot of it came from Rory’s side (Rory O’Connor, co-founder of Hub Games).

We spoke about his mother and her Alzheimer’s – really early versions of the game had a focus on the decay and loss of memory, but after working through a lot of iterations, we kind of realised that there’s no way you can really win against Alzheimer’s. It’s more ‘how well can we lose?’, which doesn’t really lead to a positive gameplay experience. If you know you’re always going to lose, why would you play a game?

We then switched the idea to zone in on the discovery of memory – the creation of a story rather than the destruction of one – and Billy Kerr came from there. The hospital setting was again down to Rory, especially the loss of his father and the times they spent in his room at night, just sitting and talking during those last days. Of course, there’s a lot I can’t talk about without spoiling things that happen in the story, but there’s certainly a lot of both of us in there.

How would you describe what players actually do in Holding On?

There’s a bit of a mix. Think of it as a half hospital management simulator, half mystery-solving game.

Every day you’re working through three shifts. One player acts as a manager who determines who will cover each section. Once there, the assigned players make the call on whether to provide physical care or palliative care.

The physical option helps keep Billy alive longer, while palliative care allows you to build up trust and discover small bits of information about his past through Partial Memory cards. The trust is actually an in-game currency of sorts, which you can spend on physical care or potentially turn the Partial Memories into Clear ones.

Each scenario will require you to do something different, but a lot of the game is driven by this need to spend time with Billy and get him to reveal things about his past, whether it’s things he did, people he knew, or something else entirely. Get through the ten scenarios and you’ll know everything – though that’s easier said than done.

With such a narratively-lead game, was it a challenge to make Holding On mechanically compelling while still driving players to resolve the story?

Oh, definitely. Thankfully, a lot of what happens through the scenarios fed into the mechanical elements of the game, and vice versa.

I learned a lot during the creation of Holding On about pulling back and focusing on simplicity, letting the game and the story breathe. Earlier versions were a lot more fiddly and complex, so what you’re actually getting to play now is much improved.

As you make your way through the game you’ll notice lots of little things that we introduced to drive people to the characters and the story. Things like putting quotes from Billy on the back of the Partial Memory cards (and having players read them out when they’re drawn), having him appear at the top of each of the Patient Cards for each shift… You’re reminded that this is ultimately the story of a person quite often, but all the time there’s this engine driving you onwards.

It does its work in the background, and honestly I’m pretty proud of it – it’s subtle, but does the job really well.

The art is fantastic. Did you always have an image of how how things like the partial memories would work/look when you started designing the game, or did that come about as the game took shape?

Rory brought Bryn Jones (the artist) into the project, and the moment I saw the kind of work he did, I knew it’d fit.

Bryn has this very evocative style that walks between dreamlike and detailed – the faded, muted style of the Partial Memories and the brighter Clear Memories where you literally get the full picture. I love the juxtaposition you get from these pairs of images.

We definitely knew what kind of style we were looking for, and Bryn captured that beautifully. He also put up with a LOT of ‘could you just move this here?’ and ‘oh, could you change this thing?’ from us. He’s got the patience of a saint, I swear.

While we’re on the art, I’d also like to give a shout to Winnie Shek, our graphic designer. Frankly, her work is as important as Bryn’s.

Her grasp of symbology and iconography helped give Holding On a truly unique style, and the pair of them have come together to help us create something beautiful. We couldn’t have made this without them both.

What do you hope people are going to feel when playing it?

A bit of everything, I suppose. We’ve said since pretty early on that you’ve not had the whole Billy Kerr experience until you’ve cried once and cursed at him twice.

The way we built the game, it really does end up feeling like you’re dealing with this cantankerous old man. He knows he has little time left, but even though he wants to tell you everything, to get it all off his chest, sometimes it’s just too much.

Sometimes he just wants to look out the window, and different players will react to that differently. One player will see it as poignant. Another player will be frustrated. Either way, they’re both valid reactions.

We want people to enjoy the experience of the game, sure, but we also hope that they’ll realise it’s alright to be emotionally affected by a game in the same way they might be when reading a much-loved book or watching a favourite film.

And hey, if it also makes people reach out to someone and find out a little more about them, to discover their story, that’d be good too.

Were you expecting such an overwhelming response from the gaming community?

Overwhelming is right. I knew we had something different, and I knew that it was good – our playtesters helped us realise that – but it wasn’t until we went to UK Games Expo that the positivity really hit me.

We were running demos every day, but the demand was huge. We had people racing to our booth the moment the doors opened so they could book to play later on.

Origins took it a step further: we pre-booked all of our game demos and they were booked up within a couple of hours. On the Saturday evening of Origins I was hanging out with some friends and talking about the show. I mentioned that I’d played through the game about 40 times with people, for ten solid hours a day, each day… and almost everyone had something positive to say about it when they’d finished up the demo.

I know there’ll be plenty of folks for whom the game won’t resonate, or people who feel that the content will make them uncomfortable, but I’m amazed at how receptive the gaming public has been in general. It’s incredibly gratifying. A bit scary too, but there’s obviously a desire out there for games that take a different approach. I only hope we don’t disappoint folks.

With such a focus on story, do you see people coming back to play it again once they’ve ‘finished’ the game?

Not everyone, but I foresee a large group of people who will want to return to Billy’s story again and again.

There’ll be a bunch of folks who will play through the ten scenarios, be happy with that, then put the game back on the shelf to never be seen again, but we’ve designed the game so that you can go back and replay favourite bits.

Personally, I really like going back to Scenario 8, because there’s a game element that delights me every time it happens. I reckon that most people will like replaying the last Scenario, because it’s very much a race against time. In the same way that you’d go back to something like Pandemic time and again, you can try and tackle Scenario 10 repeated times, trying to do better each time.

I’m hoping that players see the quality of the gameplay as much as the story and go back to beat their personal bests!

Holding On: The Troubled Life of Billy Kerr from Hub Games goes on general release worldwide at the end of October, priced at £35 / $40 / €40.