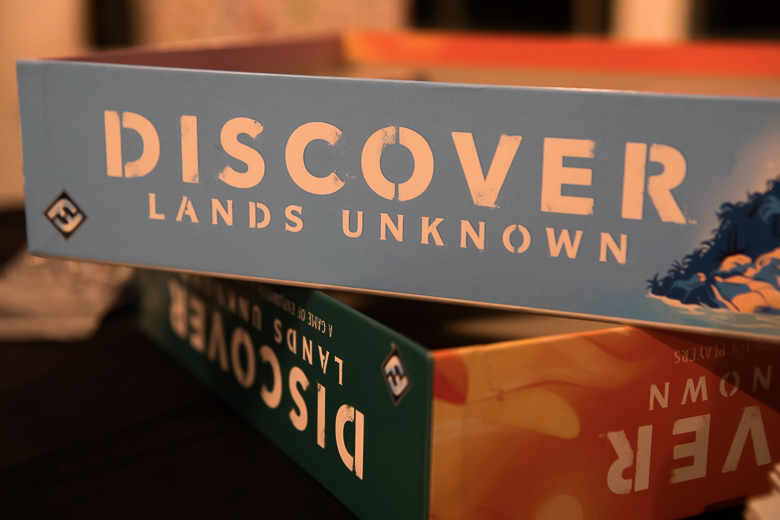 Discover Lands Unknown is a tricky beast to review.

Fantasy Flight Games’ experiment in procedural generation manages to combine a few great ideas with some unfortunate flaws. At best, many of those ideas just aren’t satisfying. At worst, they’re questionable design decisions that actively suck the fun out of the experience.

As a worthwhile recipient of your hard-earned money, it’s extremely hard to recommend.

Despite its problems, there are things in here I really like. Discover has made immediate friends with the weird space in my head that’s happy to step up and fill in glaring holes in story and mechanics. The last time something did that so effectively was 20 years ago, when I whiled away dozens of mindless hours on a deeply dodgy PC gamer called Yoda Stories – another game I will happily admit to being a bit crap while privately liking.

The same, except different

Despite its title, this isn’t a game about exploring so much as it’s about escaping.

You and up to three other players wake up in a seemingly deserted location with no idea of how you got there. You simply need to stay alive long enough to get out.

To do so you’ll tackle multi-part scenarios to unravel the mystery. These might be exploring a set number of landmarks, trying to track down a creature that attacked your camp… or something else entirely.

The board layout is semi-random, forcing players to spread out with only a vague idea of where they’re headed or what they’re looking for.

You might be exploring an island, or a swamp: a desert or a snowfield. Each one is as beautifully illustrated as the next but don’t get too hung up on any one in particular.  There’s no way of telling which locales (there are two in each copy) you’re going to get in the box.

Likewise, the scenarios you play through could bear no resemblance to what someone else gets. This also applies to craftable items, enemies, playable characters… The list goes on.

That’s because every copy is Unique! And when I (and Fantasy Flight Games) say unique, we mean it. The combination – and that’s the operative word – of components is different between every copy.

And… I’m not really sure what it adds, if I’m honest.

Don’t get me wrong, I treasure the truly unique things in my life. I just don’t agree with FFG/Asmodee’s Christian Peterson on what they are.

He says: ‘Aren’t some of the most wonderful things in life unique and defy replication? Art, kids, plants, love, life, journeys?’

It’s a fair point. But I love board games, and I don’t quite put them in the same category as my kids. Call me a filthy casual, but there you go.

On first impressions, the execution of this idea is excellent. Discover Lands Unknown isn’t an incomplete product – it all feels perfectly self-contained while you’re playing it. But knowing that there are things out there that aren’t in your box? That’s a problem for me. It plays into my worst completionist tendencies and it’s a bugbear I can’t shake when I think of Discover in its wider context.

Is the crafting deck really a bit thin? Or does it just feel that way because someone else can make a coconut submarine while I can only make a wormhole generator out of old volleyballs and palm leaves?

(To my knowledge, neither of those are in the game… but then again, I have no easy way of knowing for sure.)

Certain corners of the internet have rounded on the concept of Unique Games for being a cash grab. I don’t actually believe that FFG expect people to go out and buy multiple copies of this game, but expecting a different response from the boardgaming audience is probably being naive.
I have no problem with the concept of Unique games. My biggest frustration is that I just don’t get what it adds to this one in particular.

On a more positive note, it’s incredibly simple to dive in and start playing.

Survivors will take actions during their turns, expending stamina to run about exploring, gathering resources, and generally getting into scrapes as they busy themselves with staying alive.

As that happens, they’ll uncover unique locations on the map – graveyards, caves, research facilities and the like – and in doing so blunder face first into comparisons with a certain other high profile game.

Both games are driven, to a greater or lesser degree, by numbered decks of cards that correspond to events, locations enemies and items. Both are games about exploring a strange land and unravelled its riddles.

The parallels are obvious, but where The 7th Continent is happy to get its hands dirty with greater details and intricate mechanics, Discover Lands Unknown is a smoother and more accessible journey.

It’s far less fiddly, which works to both its detriment and its advantage.

Discover Lands Unknown is more concerned with presenting mechanisms for actually surviving. It does a better job of presenting a (very small) sandboxy ecosystem that it’s happy for you to tool around in, too.

But it’s also far less deep. And those narrative components hard-baked into it? You’ll exhaust them far more quickly with Discover.

Spend a few hours with the 7th Continent and you’re barely scratching the surface. Discover, by comparison, can feel very quickly like surface is all it’s got.

You see, for a game hung so fundamentally on narrative, there’s not a vast amount of it here.

It doesn’t take long to exhaust each locale’s secrets.

There are only four core scenarios (the fifth is a player-versus-player version that doesn’t gel completely with the others). The box promises that they hang together but in practice it’s not hugely satisfying.

These scenarios get progressively trickier to complete, but you don’t have to go a million miles to complete the story.

And once you have, the pull to return fade, and you’re left to grapple with the game on a mechanical basis.

Which is fine. Mostly. Except when it isn’t. Because without that drive to discover things, Discover Lands Unknown loses impetus. The systems are streamlined to the point of simplicity, which is great when there are other wrinkles to add interest. The game becomes less compelling when they recede.

And that’s really frustrating, because minute-by-minute, I actually really enjoyed this game. I love how it looks. The process of exploring and turning over new tiles never fails to entertain me in games, and this is no exception.

There are times when the survival aspect of the game becomes really entertaining. It’s a revelation when the limited nature of the resources becomes apparent. You’ll flip a token to find some food or water. The relief it brings is short-lived – you’ll burn through your supplies far too quickly, and start overreaching in the hope that there’s something on the next tile to keep you going…

And then night rolls around again, and you’re stuck in the wilderness alone, hungry, thirsty, and did you just hear something moving out there in the dark?

I even enjoyed the push-pull of the semi-cooperative nature of the game until the slightly-suspect resolution of one scenario fluffed it.

When that stopped making a sense I could justify in my head, I ended up house ruling it – and perhaps most damningly, it wasn’t the only time I resorted to doing so.

Whether you want to follow suit with Discover’s other thorny issue – player elimination – is up to you.

You see, it’s possible to die without costing everyone else the game. Discover isn’t a long game but it’s entirely possible to be eliminated, and have to watch while everyone else carries on having fun without you. For 45 minutes.

There’s a strong argument to say that that situation shouldn’t exist in modern boardgames; that player elimination is not OK.

I’m not here to argue one way or another – but it’s certainly present in here and only you know if it’s an issue for you.

It’s clearly experimental in a number of ways. FFG is one of the very few publishers with the resources to even consider something like this. Criticisms aside, both FFG and Corey Konieczka deserve a nod for trying something new.

I’m not convinced that being unique brings much to this particular party. Admittedly, that feels like a problem with execution rather than concept. If the game I ended up with were a little bit deeper, or just a little better, then I would probably be all for it.

But I have to ask whether the efforts put into developing it couldn’t have been put to better use. I’d almost prefer a single biome in the box with deeper, richer, and more varied locations than a change in scenery halfway through. The excitement of every copy being unique fades somewhat when each playthrough feels the same.

In much the same way, the mechanisms of the game look shakier when it’s easier to ignore rules to make things more fun.

So here’s my problem. I just can’t decide how I feel about Discover Lands Unknown.

One one hand, it makes me smile. I love the idea of it. The character art is fantastic, and traipsing through the terrain tiles scratches an itch I had forgotten I had.

But weirdly-transferred nostalgia aside, I can’t shake the nagging feeling that i’m looking for more. It’s not the production values. This is no Yoda Stories – it’s a beautiful and carefully constructed game.

But it doesn’t supply the richness of experience that I need to be able to objectively recommend it. It requires too many excuses made for it.

But is it worth trying? I’d kind of argue that it is; at least, for the right audience.

I’ve not made enough of how accessible Discover Lands Unknown is.

It’s really simple to play, and it’s still a joy to have a concept that doesn’t start with zombies, orcs, or aliens.

I love all those things unashamedly but if I want to engage my wider family with this at Christmas, pitching them ‘Lost: The Boardgame’ is a much easier sell.

It might be outclassed by much of its competition in the same weight class, but there’s plenty to be said for thematic games that aren’t dungeon crawlers – for this reviewer, at least. Abstract games are great but sometimes I need to reel people in with the promise of a story. My wider family are definitely in that category.

And ultimately, that’s who I’ll play this game with. With the right audience, the flaws take less of a shine off things.

If you’re looking for a tighter, fair experience with no road bumps, you may be disappointed.

But come prepared to laugh at someone chasing a goat around a desert and you might find something to love.

Now, if you’ll excuse me, I’m off to try and catch fish and hunt for medicine. Uncle Derek’s got dysentery and that rudimentary turbine engine won’t build itself…