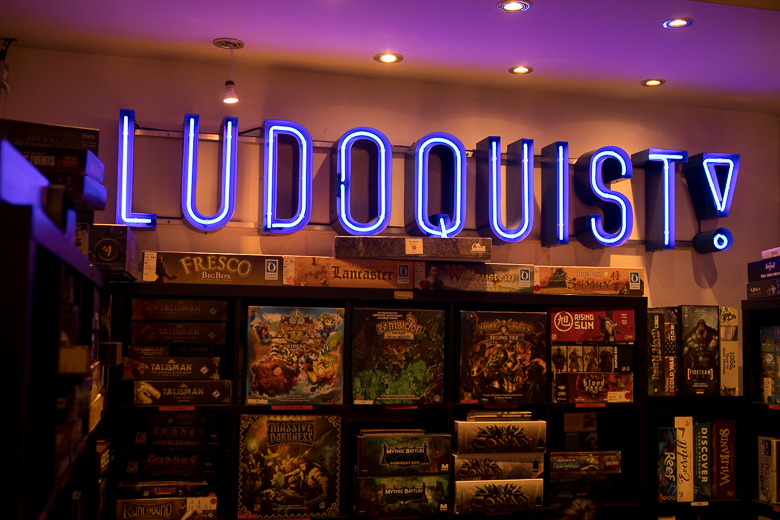 Burglary, beer and telepathy: just another night at The Ludoquist gaming cafe

‘So… what do you want to play?’ To the untrained ear, that might seem like a straightforward question.

But staring at the stacked shelves of The Ludoquist board game café, it’s anything but simple. I feel like Tyrion Lannister at one of Littlefinger’s finest establishments.

The sheer number of games on show is absolutely obscene. My eyes flit across the piles of games, greedy but indecisive. I see Blood Rage, Mage Knight, X-Com, Mansions of Madness and want to play them all. Now.

I glance covetously downwards at the current jewel in my gaming crown, where the imposing box of Gloomhaven rests, begging to be unboxed and thrown across the table.

But I catch myself and remember where I am. It’s my first night at The Ludoquist and at a board game group. I’m a nervous newbie. I can’t just waltz in and immediately demand to play one of the complex, rules-heavy dungeon crawlers that I’ve been itching to try. Could I?

Not tonight, at least. It’s an evening to meet some new people, have a beer or two and play some cool games. And it delivers on every front.

Frantically not being that guy

Writing this with the luxury of hindsight, I shouldn’t have been nervous. The signs were good from the very start.

I’d arrived at East Croydon station (just moments from The Ludoquist) a little early, so I stopped off for a quick pint at a favourite haunt of mine, the Cronx bar.

The selection was as always, excellent, but staying in tune with my later gaming dilemma, I just couldn’t decide what to drink!

I therefore bowed to the wisdom of the barman, and asked for a recommendation. The Five Points XPA was an excellent choice: a light, fruity pale with a bitter finish. It was exactly what I needed, and the ABV was in the right range at a refreshing 4%. After all, I didn’t want to rock up to board game night as that guy. I don’t want to be the drunken fool who gets loud, forgets the rules, and shouts at the other players.

After my dose of Dutch courage I was ready to head to The Ludoquist. The beer had done its job, and I was ready for the café.

Luckily, I wasn’t going in blind. I’d been checking out the café for a while since noticing it next to my bus stop home. After a conversation with the knowledgeable owner and a couple of introductions to other players, I was persuaded to come back to the regular gaming group.

As soon as I walked in, I realised it was pretty much a perfect gaming menu. There was good food, literally hundreds of awesome board games, and a nice selection of local beers on tap.

Despite the pre-game beverage I was still slightly nervous. After all, meeting a group of strangers who you only know through a brief description of themselves on the internet was always going to be difficult.

Staying well within my comfort zone I followed my instincts and headed straight to the bar.

My eyes lit up at one of the beers on draught: Fourpure’s Juicebox – a citrus IPA that’s a favourite of ours at Boards and Booze. Despite the ABV being a little on the high side for a Wednesday night, I ordered a pint while asking where the board game group was.

Before the barman had a chance to answer, a friendly player standing next to me introduced himself and told me that he was part of it. He gave me the helpful lowdown and pointed me to the corner where the rest of the group was about the start.

‘Phew,’ I thought, sipping my (delicious) beer as he led me to the rest of the group. The group had advertised itself as newbie-friendly, so it was reassuring that I was being welcomed by the other players straight away.

Thankfully everyone was friendly, welcoming and inclusive. My concerns about feeling like an outsider quickly abated.

Some of the games had started already, but there was still a group who were having drinks and discussing what game they wanted to play.

It was at that point that I was shown the shelves of games and asked the big question: ‘What do you want to play?’

Come for the games, stay for the beer holders

The question wasn’t as straightforward as it seemed. To play anything, someone would be needed to talk the rest of the group through the rules. The epic fantasy romps I’d been admiring would have to wait for another night.

With this in mind, I thought it best to leave myself in the hands of more experienced members. After a little bit of deliberation, the four of us settled on Clank!, a deck-building Golden Geek nominee.

We settled down at one of the gaming tables and I instantly felt relaxed – the hexagonal table even had retractable drinks holders!

(This detail particularly impressed the other Boards and Booze members when I recounted my story. We have all encountered our fair share of close shaves due to accidental beer spillages… it sort of comes with the territory, after all).

As we set up, little details showed The Ludoquist really cares about its games. Pieces were in the right baggies, the cards had all been placed in sleeves to protect them, and all the rules were neatly placed in the top of the box.

Clank! took no time at all to set up and we were ready to play. The game was perfect for my first night – rules that were easy to understand, tactical but simple gameplay, and a really cool central mechanic.

Very simply, the aim of the game is to collect treasure from the game’s dungeon and bring it back to the palace. Movement, exploration and battles are completed via the cards you have in your deck. The winner is the player with the most loot at the end of the game. Simple!

But, of course, there’s a catch.

You didn’t think that picking up all that lovely treasure would go unnoticed, do you?

No, Clank! is in fact a burglary simulator. The victim of your crimes is a rather tempestuous (and hungry) dragon. Instead of being sentenced to community service for your crimes, the penalty for getting caught is lifetime imprisonment in the aforementioned dragon’s belly.

And this is where the really cool mechanic comes in. The game’s title is in reference to the noise you make when you’re sneaking through the dungeon.

Cards can alert the dragon to your presence as you draw them. When this happens, you place one of your coloured cubes in the Clank! section of the board, where they inevitably build up as you play.

Certain events can trigger the dragon to attack. If you have a lot of cubes in the Clank! section, chances are the dragon will be munching on you. Those cubes get thrown into a bag, along with some neutral, black cubes to delay the inevitable. If your colour gets drawn, you get bitten. Endure too many of these and you’re toast. Quite literally: the dragon eats you.

Playing the game with a group of strangers was great. Rules questions were answered with good humour, and it felt like most of the group was learning the game together.

I was relaxed and having fun, so a couple more beers followed. The Ludoquist has an excellent approach refreshment! Wary of the Juicebox’s feistiness, I moved to the more conservative Cronx Kotchin, a refreshing but lighter hoppy blonde ale.

I thought I was doing well, nabbing a couple of pretty nifty treasures for my swag bag. But my life of thievery didn’t have a happy outcome. I was eaten.

Despite ending up as a vindictive lizard’s dinner, I had a great time – and my fellow players seemed to be doing so as well.

Derren Brown, eat your heart out

The night didn’t end there. Closing time was a while off and we all wanted more gaming. One of the group disappeared to one of The Ludoquist’s games piles and returned with a stack of shorter card games. Hooray!

The Mind is a fascinating co-op card game about playing numerical cards and anticipating what your other players have in their hand.

You’re not allowed to talk to each other or make gestures indicating what you must do. You need to work out the odds on when to play your card. More importantly, you need to know your team-mates to understand what’s on their mind. When you successfully play all your cards as group you go up a level, each getting progressively harder.

Playing The Mind made me realise that I’m not exactly Derren Brown.

That said, as a group we got to level 4, which wasn’t bad for a first go. It’s definitely one I’d like to play again.

We then played No Thanks, a competitive card game where the aim is to have the lowest point score at the end of the game. Cards are numbered from 3 to 35 and each player is given a number of plastic tokens.

The top card on the deck is flipped over, and each player has to decide if they want to pick it up or leave it. But to leave it costs a token.  If you run out of tokens you have to take the card. You add up all your cards at the end of the game, and the person with the lowest total wins.

For once that night it was a game I had some success in, by going for mid-level cards and hoarding tokens.

We played a few games of No thanks until it was time for one of the group to leave. We all shook hands and said goodbye to our departing friend.  But was that the end of the night?

No, it wasn’t. Hooray again!

Other players from different groups had also finished, making six of us who wanted to keep on scratching our gaming itches. A silly, but entertaining game of Walk the plank– a really short but funny game of trying to push your opponents off a sinking pirate ship – ended the evening.

It really wasn’t my night. I’d been eaten by a dragon, failed miserably at telepathy and now came the icing on the cake. Within two rounds my pirate crew had all been devoured by crocodiles! And worst of all, it was now time for my bus home.

But it had been a fantastic evening: a terrific venue, fun and interesting games and, most importantly, awesome people.

By the time I got home I was already checking my diary to see when I could come back. I whole-heartedly recommend The Ludoquist as an excellent gaming venue.

2 Thoughts on “Burglary, beer and telepathy at The Ludoquist”