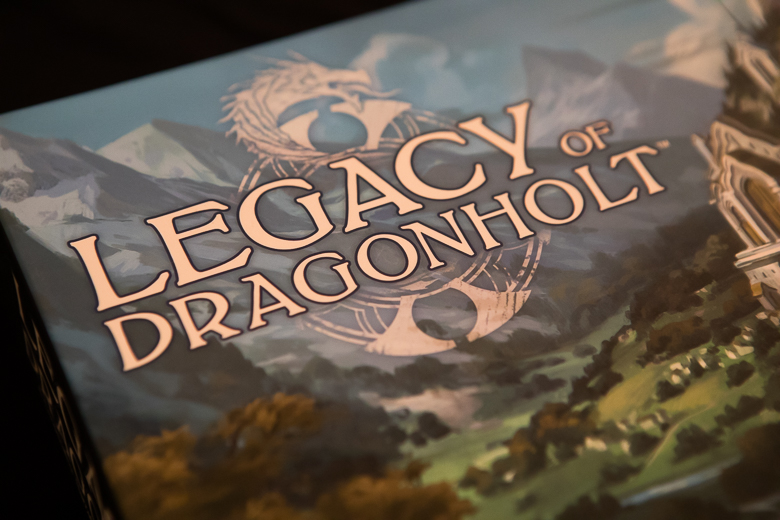 Is everyone sitting comfortably? Then I’ll begin…

Once upon a time, there was a game called Legacy of Dragonholt. It wasn’t one of Fantasy Flight Games’ more bombastic releases. If anything, it flew a little under the radar when it came out at the end of 2017.

You see, Legacy of Dragonholt wasn’t like its brothers and sisters in the world of modern boardgames.

There were no dice. It had no board to call its own, and barely even any cards to its name. By all accounts, it was a strange fit.

But what it did have were books. Lots and lots of books – some with rules in, but many more with wonderful stories in them. And with those books it would find a home for itself: a place where it belonged. That home was in the hearts of everyone raised on a diet of Fighting Fantasy and Lone Wolf novels, in the Kingdom of Choose Your Own Adventure…

Wisdom of the oracle

Invitation to write a self-indulgent intro notwithstanding,  how does one review a game like Legacy of Dragonholt? It’s a board game that doesn’t really have any mechanics. Luckily, it does instead have a surfeit of story – and we claim to be all about that here, so we’d best get cracking.

Pitched as a grand narrative adventure, and the first game to use FFG’s grandly-titled ‘Oracle’ system, Legacy of Dragonholt wants to introduce players to the world of RPGs.

Check your dreams of a dungeon master-less RPG at the door though, because what we have here, ladies and gentleman, is a choose your own adventure book. In a box.

And you know what? That’s absolutely fine.

I like choose your own adventure books. The prospect of one that lets me play with a few more people really appeals, and the minute you open the box it becomes quickly obvious that that’s what you’re getting into. I’ve never seen an FFG box with so few tokens inside. There is a thin deck of cards too, but once they’re turned over and examined a few times, it is all about the books.

You get a very slim rulebook, a character creation guide, some tracking sheets, and a stack of adventure books. Each one is brightly illustrated and smartly designed. It’s the gamebook turned into an experience.

Hopefully, that experience can be shared – and I’ll give FFG one thing on that front. The barrier to entry here is low enough that it can be shared with people who might not otherwise be interested.

So what’s it actually about? Without freewheeling into spoiler territory I’m forced to be vague, but in a nutshell: it’s a great fantasy jape.

Over the course of a couple of in-game days, your adventuring party will investigate an overarching mystery, punctuated by heading off into the wilds to pursue other, briefer diversions. (Side quests, in other words.)

Each adventure is split into its own book, neatly sectioning your progress off piece by piece, with the largest reserved for the titular village of Dragonholt.

These side quests are comparatively linear, usually offering a couple of different outcomes, but the the village itself feels admirably open once you arrive there, offering a much more freeform experience than you would expect.

It’s still a physical product, mind you, with practicality providing a limiting factor in just how much copy – and therefore how much freedom – the designer can cram in there. That village book is a meaty beast, perfect-bound and packed with interactions.

And those interactions aren’t bad. There’s more agency here than you might first think. With plenty to do and see, and a well thought-out approach to making the village feel real, the designer has done an admirable job here. The story obviously isn’t completely free form but that village somehow feels like a sandbox – your choices feel meaningful too.

As far as ‘cooperative narrative adventures’ go, it lives up to its billing. Legacy of Dragonholt is no RPG but it’s a great way to get some of the feel with less of the investment. Or with people who might otherwise be averse to the idea…

Let’s put it this way. There is no way I’m ever going to convince my wife to play through a full tabletop RPG campaign with me, and my children are still just slightly too young to truly start indoctrinating, sadly.

But Legacy of Dragonholt? Now that’s much less of a hard sell. It’s more involved to play than most gamebooks but very easy compared to most board games.

First you’ll create characters, shaping their abilities by choosing from a list of skills. And then you’ll start reading; making choices and turning to relevant entries as the game unfolds. Along the way you’ll have to track a few bits and pieces like health, time and crucially ‘story points’, but on the whole it’s that simple.

If anything, getting started is the hardest bit.

That character creation process is a bit of an uphill struggle, particularly for newcomers, or those less familiar with RPGs. The game really wants you to build a character that’s more than just a bag of skills. (I could see my wife wondering what I’d gotten her into when I started asking her about the background of her cat person.)

Defining a fictional character beyond numbers or skill sets is often the biggest stumbling block for players familiar with video game RPGs over their tabletop counterparts, and Legacy of Dragonholt felt no different.

It doesn’t take too long for characters to be created so this awkwardness is mercifully short-lived. Essentially, you pick from a selection of FFG-flavoured fantasy stalwart races and backgrounds (elven wizards, orc fighters, human rogues and so on), choose some skills to throw into the mix, and add a vague dash of flavour (‘I’m going to play a fighter… with a beard!’) – and set off into realms unknown.

From there, it’s plain sailing.

Most of the complexity in the game comes from the writing – that’s to say the sheer volume of written entries that the designers have woven together.

If the game feels elaborate (and it often does), it’s because of that narrative. Playing it is simplicity itself.

If you can read, count, and refer to your list of keywords then you can play Legacy of Dragonholt. The keywords are easy to remember: they’re simply your character’s skills, which you can choose to apply (or not) when the story gives you the chance. Be aware that they don’t always lead to positive outcomes!

If you’re tackling it solo – and there is absolutely no reason no to – then it’s perfectly serviceable.

The writing itself is generally pretty strong. It sets the scene and tells the story well. It’s taut when the action requires it, and tries to be descriptive when there’s more room to breathe.

But when you’re reading it out to a table of people, it feels a bit… wordy. Playing with one, maybe two other people is probably going to be intimate enough that you can get away with it, but with up to five others at the table? I’m not sure the exposition works at greater player counts.

Balancing the need for brevity against the need to evoke this fantastical setting was always going to be a hard ask. But it IS a book, and FFG has access to some hugely talented artists – why not include more images? A few more illustrations and less description would definitely help immersion at the table.

But that’s a minor gripe. The story itself is actually engaging and varied.

Furthermore, the location itself feels like a living, breathing place. That’s a triumph of both writing and planning that deserves recognition. I’ve seen the ‘decision tree’ for games like Monkey Island and I’d love to see something similar for this.

And there’s more to like too. It really shouldn’t be the case that a wide-ranging depiction of capable women is rare enough to warrant singling out for praise, but that’s society’s issue. Irrespective, it’s good to see a range of characters genders (and sexual orientation) tackling all sorts of roles in the world on show.

Do we need to talk about value here? Legacy of Dragonholt isn’t cheap, and it would be easy to dismiss it as being expensive on the basis that most of what you’re buying is text. As a writer I’m hard-wired to be biased against that. What you’re paying for is the hard work and ingenuity that’s been poured onto those pages.

You’re probably also paying to experience it once.

I’m not sure that’s a problem, but it is a consideration. I can tell you that I had several very enjoyable evenings going exploring Dragonholt and its surrounds. What I don’t have is a burning desire to rush back through it and find alternative endings.

If it’s not clear by now, I like Legacy of Dragnholt a lot, but there’s no way I can recommend it unequivocally.

It’s an oddball experience really – a cooperative narrative adventure that polishes some of the conventions of the genre and feels like a labour of love.

As an experiment, I applaud it. As someone who wanted a different experience that let me share some of my interests with my usually long-suffering wife, I really enjoyed it. I’d absolutely play it through solo. But would I break it out on game night? Not so much.

Then again, that’s not really who it’s for.

You probably already know whether this will float your boat or not. Do you enjoy the choose your own adventure format, or do its limitations chafe?

If you’re the former, you’ll find things to like here. Its clever decision-tracking mechanic and sheer level of polish make it a unique experience.

If you’re not, that’s fine too. There are plenty of more traditional games out there to enjoy. Plenty of them feature the designer’s (the awesome Nikki Valens) dedication to narrative too.

Most of them featuring more ‘game’ with the story too – if this sounds interesting but you want something more traditional. (Check out our love of Eldritch Horror, for one great example.)

And if you’re just wondering whether the Oracle system is ever going to make another appearance? Well, you’re in good company. 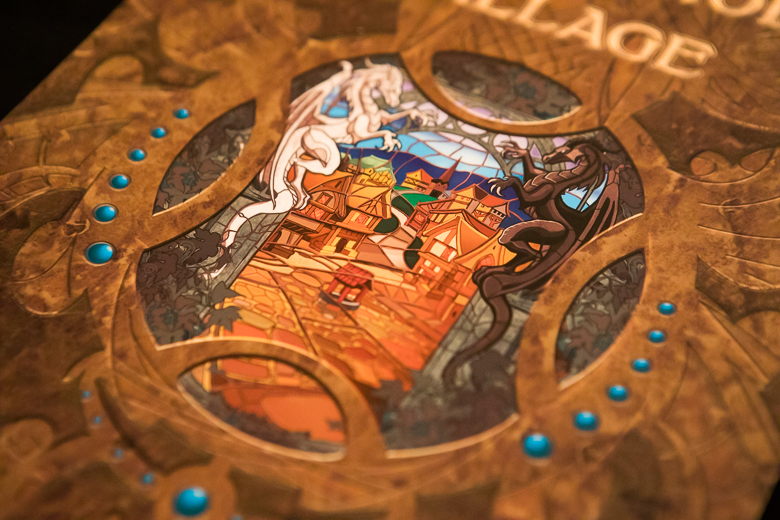